A speedy sports car with its sexy curves, a pencil skirt that flirts with the knees and belongs in every woman’s wardrobe, a lamp with a futuristic appearance and a kettle inspired by Pop Art – design classics from Italy can be found in every area of our lives. Why are they so enthralling and why is “Made in Italy” such a style statement? Here are our answers …

Respect for tradition …
Italy is the home of art, culture, gastronomy and “la dolce vita”. The Italians are extremely proud of their heritage, whether cuisine originating anywhere from Parma to Palermo, clothing, their car industry, furniture making or signature products such as Chianti. Scarcely any other country pays such deep respect to the upholding of tradition: small-scale manufacturing companies, agricultural holdings and family-owned firms maintain and nurture production and fabrication methods that, in some cases, look back on a heritage that is centuries old. A hand-woven bag made of soft, buttery leather, a mouth-blown vase fashioned from Murano glass, an eau de cologne prepared to a secret formula from a monastery: these are a few examples of Italian classics that are prized and cherished worldwide, not only on account of their materials and manufacture, but also – and most importantly – because of the history behind them. And yet Italy is anything but backward-looking: Michelangelo’s home country has always been a place where new vogues come into fashion, styles are created and trends are set. Particularly when it comes to design.

… and a love of modernity
Valentino, icon of haute couture, put it succinctly: “The key to modern fashion lies in the union of tradition and the avant-garde.” And, true enough, Italian design is defined above all else by its love of what’s new, modern, experimental and even revolutionary, which is never at the expense of what’s worked before, but instead presents old and new in a hitherto unexplored context. This is particularly evident in Italian product design dating from the second half of the 20th century, a period in which creative geniuses in the fields of architecture, art, design and industry developed a visual idiom that elevated functional products such as cars, typewriters and kitchen utensils to the rank of sought-after objects. Their approach was entirely in keeping with the motto of architecture theorist Ernesto Nathan Rogers, who coined the slogan, “dal cucchiaio alla città” (from the spoon to the city), referring to post-War modernism and advocating a world designed in accordance with straightforward, holistic concepts. The beautification of banal objects, indeed the prioritisation of aesthetics above functionality – these new-fangled creative aspirations were, in their most recent guise, taken to extremes by Ettore Sottsass’s legendary Memphis Group, which sought to break down the boundaries between art, architecture and industry and to make design accessible to everyone. 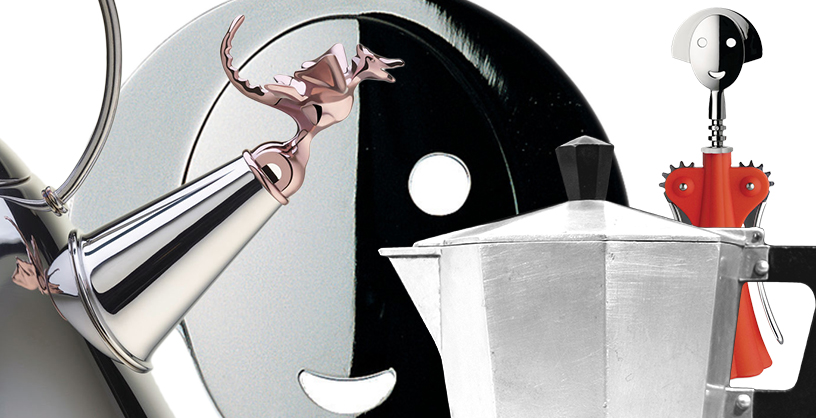 Italian style icons
Modern and traditional, classic and innovative; in short: timelessly beautiful describes many of the classics from Italy that make design lovers’ hearts beat faster to this day. And while the daring look of the once ultramodern Olivetti typewriter and the avant-garde silhouettes of Alfa and Fiat cars are today considered waypoints in the history of design, shaping many a retro style, so too are there cult objects that have remained unaltered since they came into existence – without losing anything of their must-have character. For instance, almost every household – and not only in Italy! – has a good old “Moka” coffeemaker, which was brought onto the market as long ago as 1933 by “Bialetti” as the first espresso machine for domestic use. Its industrial-looking design has scarcely changed since then, although it now boasts countless colour options and functional innovations. With their characteristic vintage appearance and a colour combination of gleaming chrome and racy red, slicers made by “Berkel” are another cult product – they’re considered veritable status symbols among gourmets across the world. Meanwhile, a corkscrew has also become an object of desire for style-conscious sommeliers, professional and amateur alike: “Anna G.”, designed in the 1980s by Alessandro Mendini for “Alessi”, is a still bestseller and has evolved into a colourful product range typified by its smiling face.

A bit of fun is vital
Smiling corkscrews and the innumerable fun Giovannoni figures serving as the endearing faces of “Alessi” kitchen gadgets are just some of the products that highlight humour as another important element of Italian design. Or, more specifically, the attitude that perfection and quality can indeed go hand in hand with imagination and a bold approach to the unconventional. In furniture design this principle opens the door to entirely new opportunities and creative scope, for example in the form of modular systems such as the “Infinito” bookcase from “Cassina”, which was designed by Franco Albini back in 1956. Its ingenious flexibility and expandability has been adopted by many other manufacturers over the years. Then there’s the “minikitchen”, a practical trolley workstation with a futuristic design masterminded by “Boffi” in 1966, which has lost none of its allure with the passage of time: a recreation of the original, using the innovative Corian solid surface material, is being produced by the upscale kitchen manufacturer. Another enduringly popular product dates back to 1987: the “Tolomeo” desk lamp by Michele de Lucchi. Whether in an office or domestic setting, this best-selling item made by “Artemide” expresses elegance in a timelessly Italian style.

La vita è bella
In summary it may be said that Italian design – just like Verdi’s operas, Fellini’s films, Armani’s clothing and Sophia Loren’s smile – fulfills one purpose above all else: to make life more beautiful. “Practical” doesn’t have to be “chic”, of course. “Functional” is undoubtedly perfectly possible without that certain something. But why should we forego surrounding ourselves with items that make us happy and inspire us? Let’s leave the final word to design icon Ettore Sottsass: “Good design is like having the opportunity to fly to the moon. Only a few people will ever be able to do it directly, but an awareness of this opportunity has changed the lives of millions of people.”