Two passionate proponents of Frankfurt am Main, Detlef Braun Member of the Executive Board of Messe Frankfurt and prize-winning restaurateur Christian Mook, sat round a table and naturally began to talk about the city. They love living, working and relaxing in this international location, and they home in on anything new. We sat in with these two connoisseurs as they chatted and learned why it’s so important to look outside your own bubble – and just what’s cooking in Frankfurt these days.

“You’ve turned it into something sensational,” enthuses Detlef Braun about the interior at the Mon Amie Maxi brasserie and oyster bar near the Alte Oper opera house. In a complete makeover, it was out with the old Paris bistro style and in with plush velvet chairs, chandeliers by Belgian designer Pieter Porter and lush flower arrangements. These complement a cosy colour concept to give an almost burlesque feel. Christian Mook, the brains behind this opulent outcome, is delighted that his hard work has been worthwhile and relishes the opportunity to explain the radical change: “I was imagining a sort of regal, country-house style – like a Maison de Campagne.” The rustic cloth napkins are part of the overall design concept, a tongue-in-cheek contrast to a refined champagne or 1999 Montrachet. 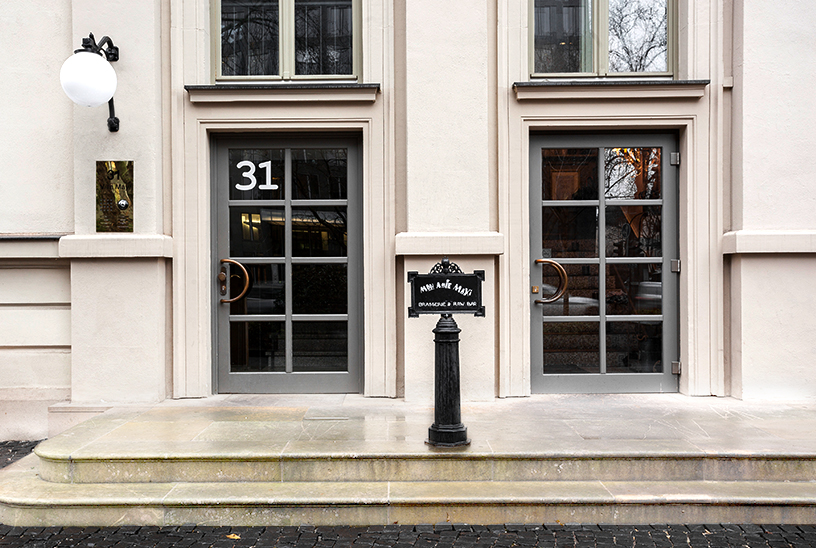 The Frankfurt-born restaurateur garners his inspiration for his restaurant décor and table settings from around the world, and is always on the lookout for new ideas. He told us Ambiente is a firm fixture in his diary each year: “I go through it all, hall by hall. I’ve got to know a lot of suppliers that way. For example, I discovered the copper cutlery for our restaurant ‘The Ivory Club’ – we were the first to come up with the ‘English club in colonial India’ design concept. I have also found a lot of things there for our new restaurant with its modern take on traditional German cooking, for instance just the right cutlery and some stylish glasses.” 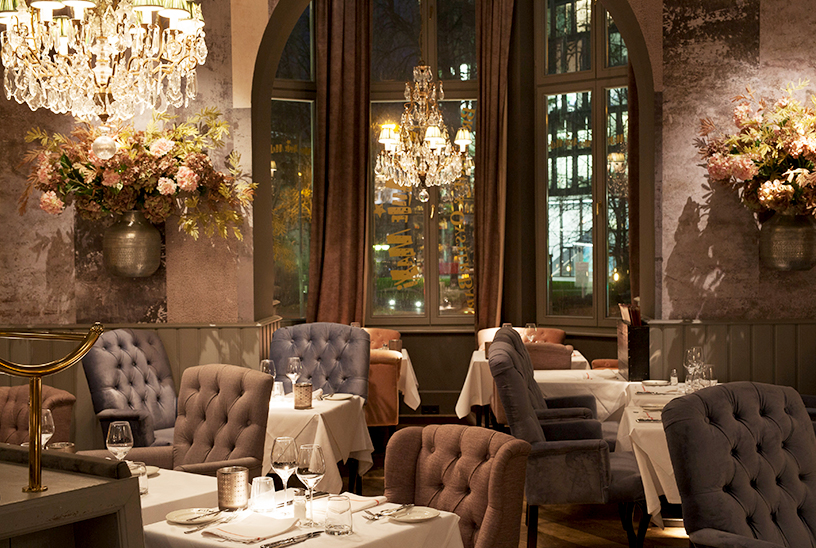 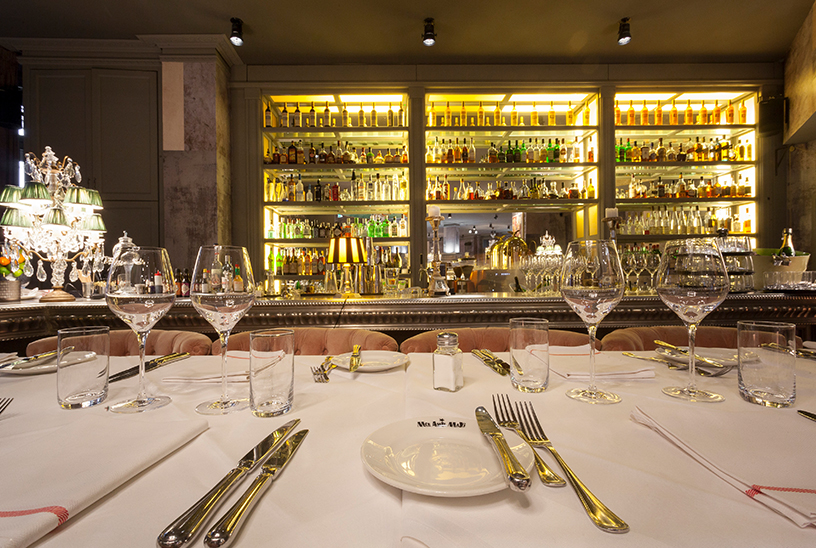 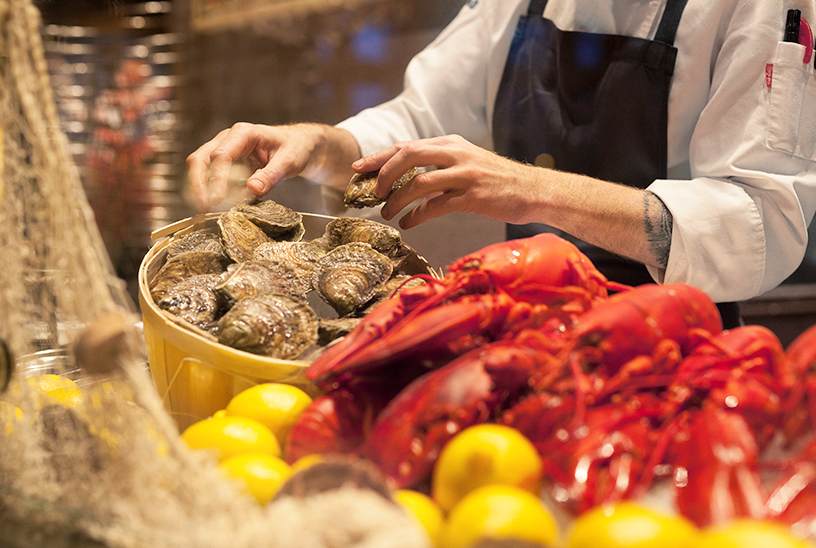 What the world needs now

A love of Frankfurt: these two local guys embody it with every fibre of their being. They’re also frequent fliers and value the city’s great connections. “Here, everything’s just a stone’s throw away. I can get quickly from my apartment or the exhibition centre to the airport, and from there I can take lots of different direct flights,” Detlef Braun explains. Restaurateur Christian Mook agrees – he lives in the city’s Westend district with his family. Both men also love the rapid upward growth of Frankfurt’s skyline. Christian Mook enthusiastically envisages the scene: “I find this new craze for high-rise living really cool, and our construction boom is spectacular by international standards.” He’s thinking in particular of the revamped Henniger Turm, now one of Germany’s tallest residential buildings. The Mook Group will be opening a restaurant called ‘Franziska’ there in 2018, at some 140m above street level. Like everything ‘mine host’ touches, this will cause quite a stir: “It will have 360° views, and a glazed sky deck. The building’s core will be surrounded snugly by a circular, completely open-plan kitchen counter. That’s where two of the most on-trend gastronomic phenomena will come together: rooftop dining and the chef’s table.” The sky’s the limit for premium eateries in Frankfurt, and a lifestyle experience like that will be talked about far and wide. Detlef Braun expands on this: “We often have guests from over 180 countries, and our exhibitors and visitors really value the experiential side of this city. With excellent cuisine, museums and a strong creative scene, we have the key factors already – and we need to take them further to the top international level in future. There’s no question that Frankfurt has shed its image as a purely financial hub.” 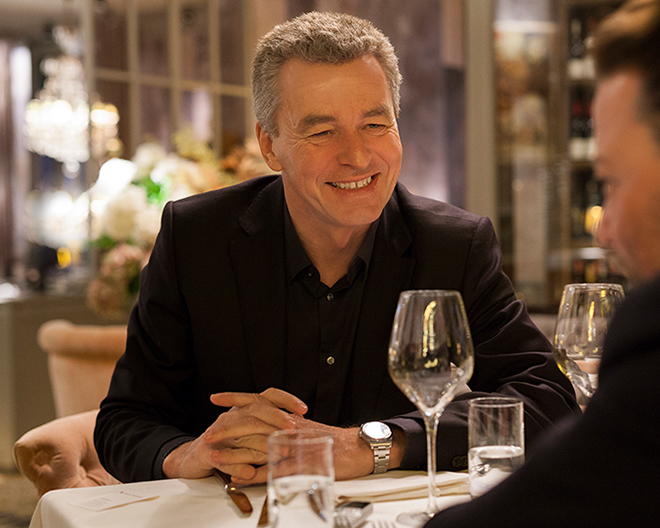 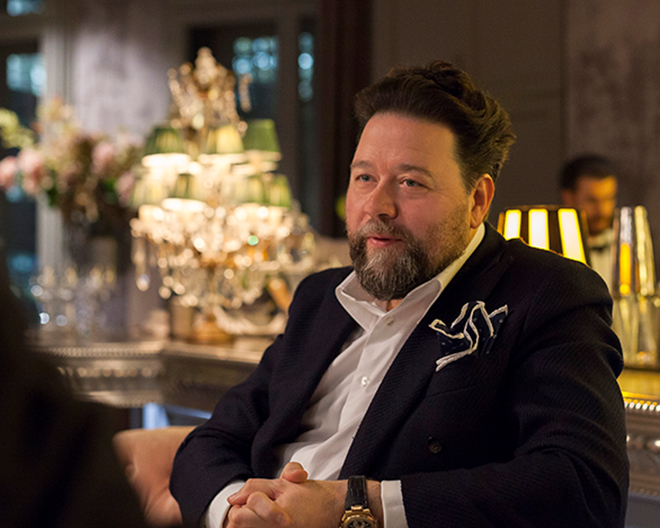 “If I’m not in my own restaurant, then I’ll be on an expedition. I’m passionate about scouting for new concepts, then developing them. I always decide where I want to travel according to gastronomic criteria. If there are exciting restaurants opening in London, I’ll be there.” In fact, Christian Mook saw a concept in Moscow which could also work well in Frankfurt. “Take Ugolek for example, which has a show kitchen where meat is cooked in a charcoal oven, it’s all very relaxed.” When friends are visiting in Frankfurt: “I love showing them our traditional apple wine bars, the Kanonesteppel is one of my favourites. We often go to the Wasserweibchen in Bad Homburg, too.” The Frankfurt locals turn now to the subject of London – an acknowledged gastronomic trendsetter that is now facing Brexit. Detlef Braun can see a synergy effect here: “There are Brits who will make Frankfurt their home in the next few years, and with them will come more of their lifestyle. They will be looking for cultural and restaurant experiences on a par with those in London and other major cities. Overall it will make Frankfurt more diverse, more international, and this will be reflected in its dining culture. Design and fashion-conscious Brits – as well as others from around the world – really appreciate the top-quality culture on offer here such as the Jil Sander exhibition currently at the Museum Angewandte Kunst.” Everyone will benefit from the variety of inputs and influences. “But in addition to major players such as London, smaller cities are also a source of inspiration for me. For instance, there are lots of great spots in Amsterdam – and not just in the creative Noord district,” enthuses the self-confessed ‘foodie’ Mook. His tips for places in the ‘Venice of the north’ were not long in coming: ‘Mr. Porter’ is one of the coolest steakhouses I’ve ever seen. And the French bar/brasserie ‘The Duchess’ in a former bank building in the city centre is another place you’ll never forget. Whether you’re based in Amsterdam, London or Frankfurt, your eatery will only work well if your customers believe that the atmosphere, food, service, the whole package is worth every penny. It’s not enough to just follow trends, ideally you should set some yourself.” Trade fair supremo Detlef Braun has good news in this regard: “Amsterdam’s design scene is coming to Ambiente. This year’s partner country is the Netherlands, a small but extremely important country in terms of interior design. Sadly, many people still continue to underestimate it.”

Living and working in Frankfurt

My city; my home. Detlef Braun enjoys living in an apartment in the Nordend district of Frankfurt, in a light, minimalist setting with lots of white and a few red accents. Mook, on the other hand, basks in a baroque space, with a love of luxury and ultra-chic design objects and works of art. Braun gets straight to the point: “Frankfurt is where I call home, it’s got the whole package – top jobs, the best business and connections. It’s more compact than almost any other city of its size. I feel very at home here.” This is a man who knows many a trend-seeking metropolis. Before moving back to the German state of Hessen, where he grew up in Erbach im Odenwald, Braun lived in New York and Tokyo. He still spends half his life outside Germany. He loves having his own stove, a relaxed space to prepare and eat food and his terrace in summer. But does he make use of pizza delivery services? “It has been known. Takeaways are more popular than ever. The US has shown us the way on that,” says Detlef Braun. Mook smiles, since he owns several restaurants within walking distance of his family home and eats in one or other of them every day. They don’t do deliveries of their signature dishes. Christian Mook says firmly: “Luxury home delivery may be the latest thing in Berlin, but not here. Good steak, sushi or oysters are well worth enjoying in a stimulating, sociable atmosphere. It’s possible that convenience products have a great future ahead of them, but not for people who want a top-notch experience alongside their culinary delights.” 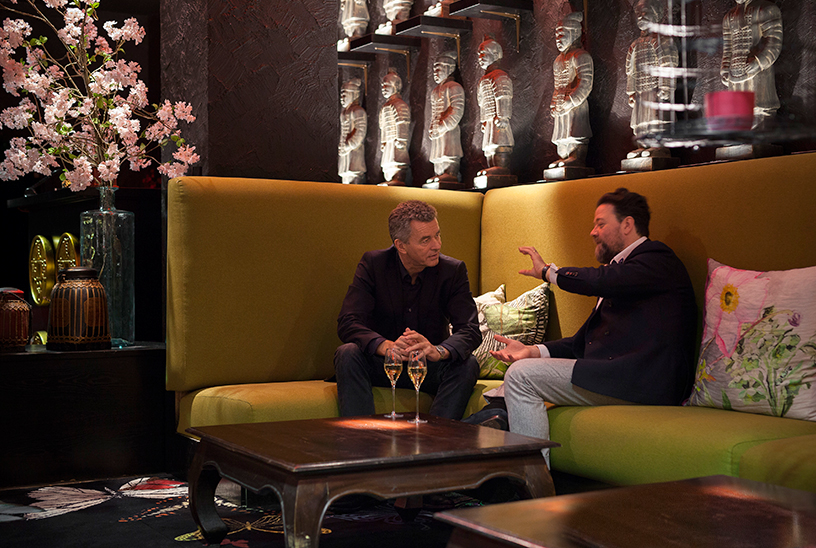 Gastro-couture and this year’s colour

To illustrate his future predictions with another example, Mook mentions his pan-Asian supper club Zenzakan. It may be close at hand, but inside the extensive premises of a former works canteen you really feel you’ve been transported into a sophisticated, exotic setting a world away from Frankfurt. There are black walls, golden Buddha busts, Asian antiquities and dragon statues – which all make up a mysterious, illuminated treasure chamber. Christian Mook has lovingly gathered these little details from all around the world. A contemplative centrepiece in traditional Japanese colours on the tables rounds off the visual experience. The mood is further enhanced by glossy black chopsticks. Mook explains: “I create restaurants first and foremost for myself,” which perhaps gives us a glimpse of the secret of his success. He’s a free spirit, who thinks globally but enjoys playing at home. That’s the real essence of luxury. 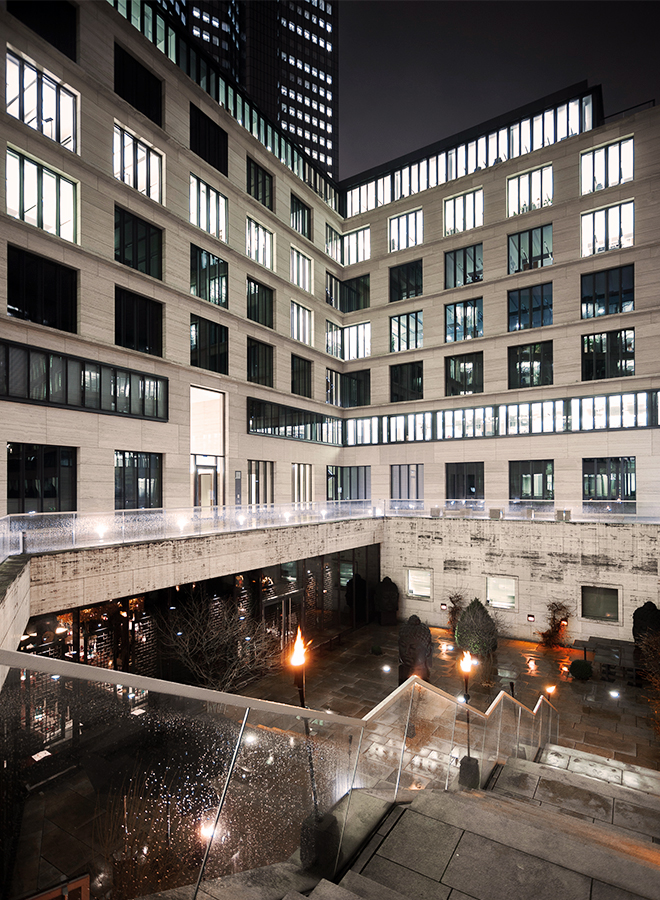 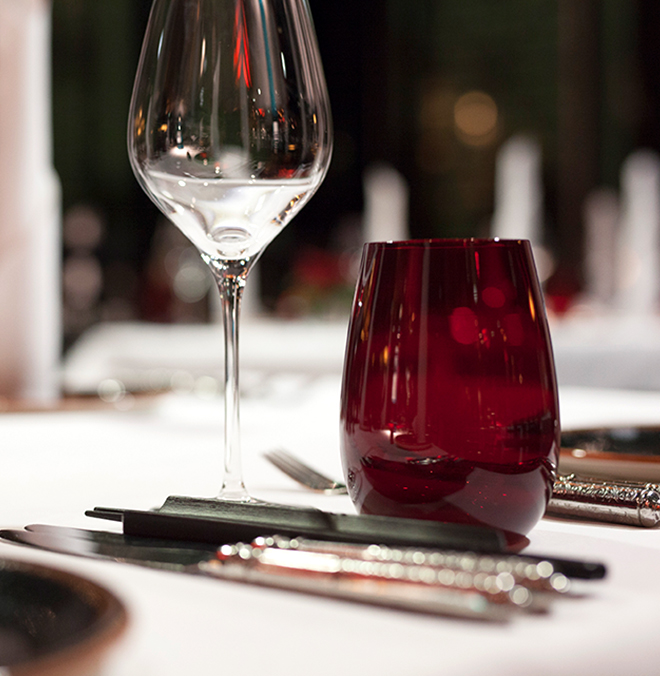 Now all that remains is to ask what our globetrotters think of this year’s Pantone colour of the year, Ultra Violet. This contemplative purple shade stands for visionary thinking, and in psychological terms it brings a pleasing calm. The experts agree: “Super. Mystical and original.” How it comes across depends on the colours and materials it’s combined with; Ultra Violet goes well with metallic or yellow shades. It makes Christian Mook think of Yves Saint Laurent’s classic purple: “His women’s fragrances are intrinsically linked with their purple bottles.” Which lifestyle products will come in this latest colour? We’ll have to wait and see at Ambiente.

Co-living: At home in a hotel.

DAILY WRAP 4: A Union of Jack, Friends, and Teatime