In recent years, co-working has taken the world by storm. Next in line is co-living: the new shared spaces are far removed from your average flat share. This new development offers hotels in particular a fantastic opportunity, despite the coronavirus. There are of course design challenges involved in living and being together in a creative environment, and these could make or break the co-living concept.

Co-living in Frankfurt: The luxury of living, together

The Lindley Lindenberg in Frankfurt is like living at a friend’s house. There’s a kitchen, living room (with a large record collection) and small herb garden. Manager Nils Jansen explains “We’re neither hotel nor flat share, yet we’re both – at the same time!”. The Lindley is the third hotel in Frankfurt belonging to the Lindenberg group. They all follow the same successful formula: a collective of guests, welcoming both overnight stays and longer stints of several days, weeks, months or even years. Each guest has their own room, but can also access a whole range of communal areas. The model is borrowed from a new way of being, which is becoming increasingly popular – it’s a concept known as co-living, where people live together in private rooms and share the other living spaces. While that might sound like a conventional flat share, it’s actually fundamentally different. Flat shares save money, but the same can’t necessarily be said of co-living. The main reason behind it is often ideological, a wish to live with like-minded people. The furniture is not well-worn, it’s designer ware. Individual rooms have their own bathroom, and perhaps even kitchen. The shared areas here are more extensive – including a library, balcony or garden. This hospitality is reminiscent of luxury apartments, with art on the walls, original designer seating and tableware from friendly local potters. It’s no wonder, that the Lindley Lindenberg won this year’s AHEAD Award in the category “Hotel Newbuild”. 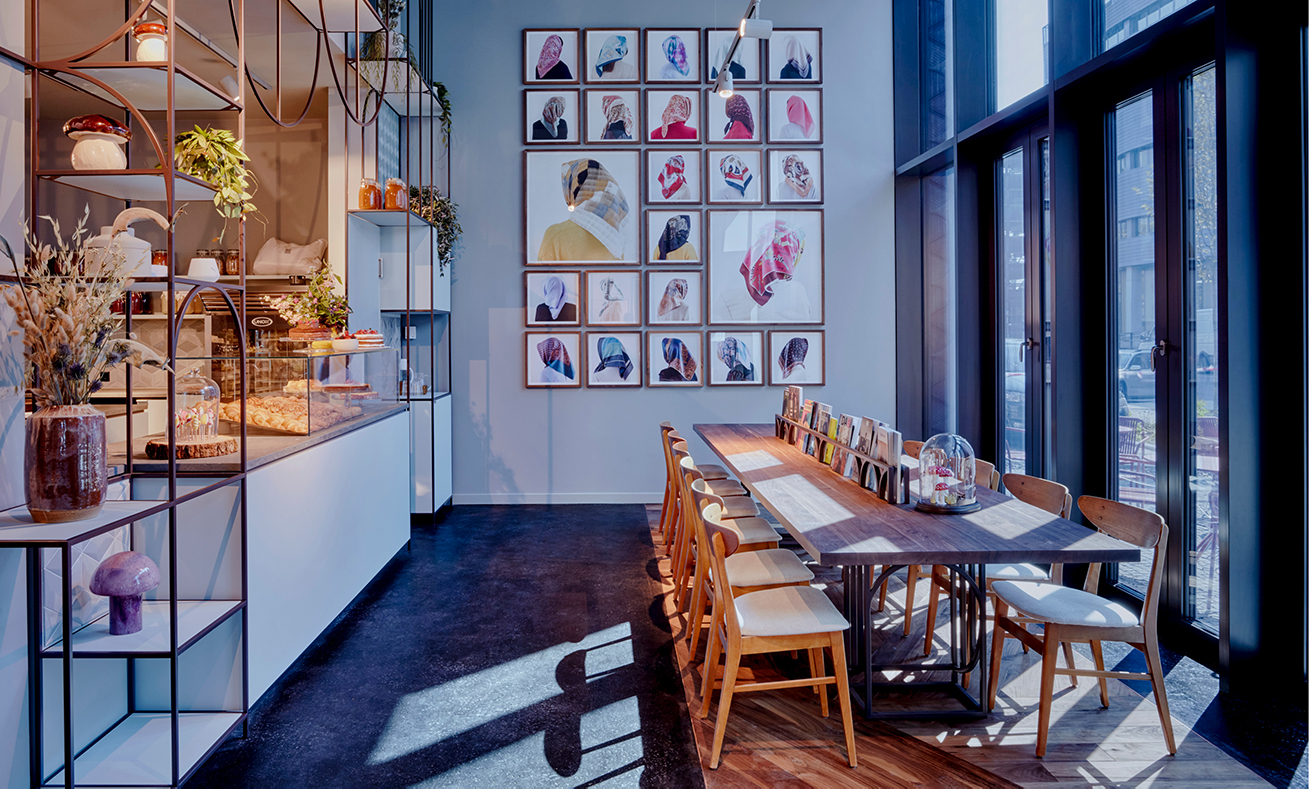 Storytelling at the Lindley Lindenberg

The design for the Lindley Lindenberg hotel was inspired by some hyper-local storytelling – the building is on Lindleystrasse in the dynamic, creative east side of Frankfurt. It’s named after British railway engineer William Lindley who planned Frankfurt’s canal network, starting in 1863. These brick-built canals are still in operation, famed for their extraordinary combination of looks, form and function. Nils Jansen says “We focused on this period. For example, we have the classic Thonet chairs with Viennese woven wickerwork – some originals and some replicas. We also managed to find china to fit this coffee-house aesthetic. On the other hand, Frankfurt designer and ceramicist Viola Beuscher worked with us to develop the hotel’s own cups and plates. 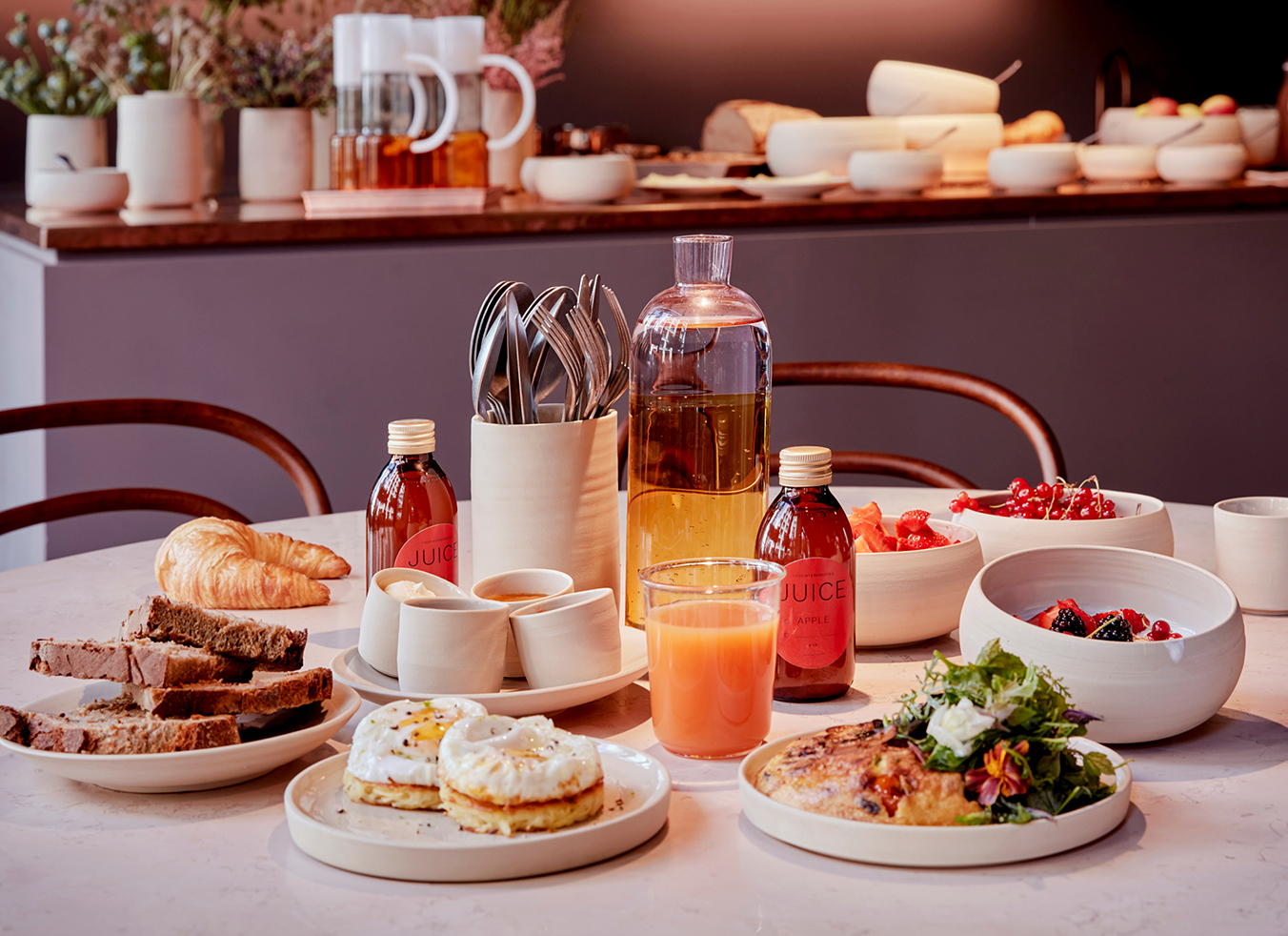 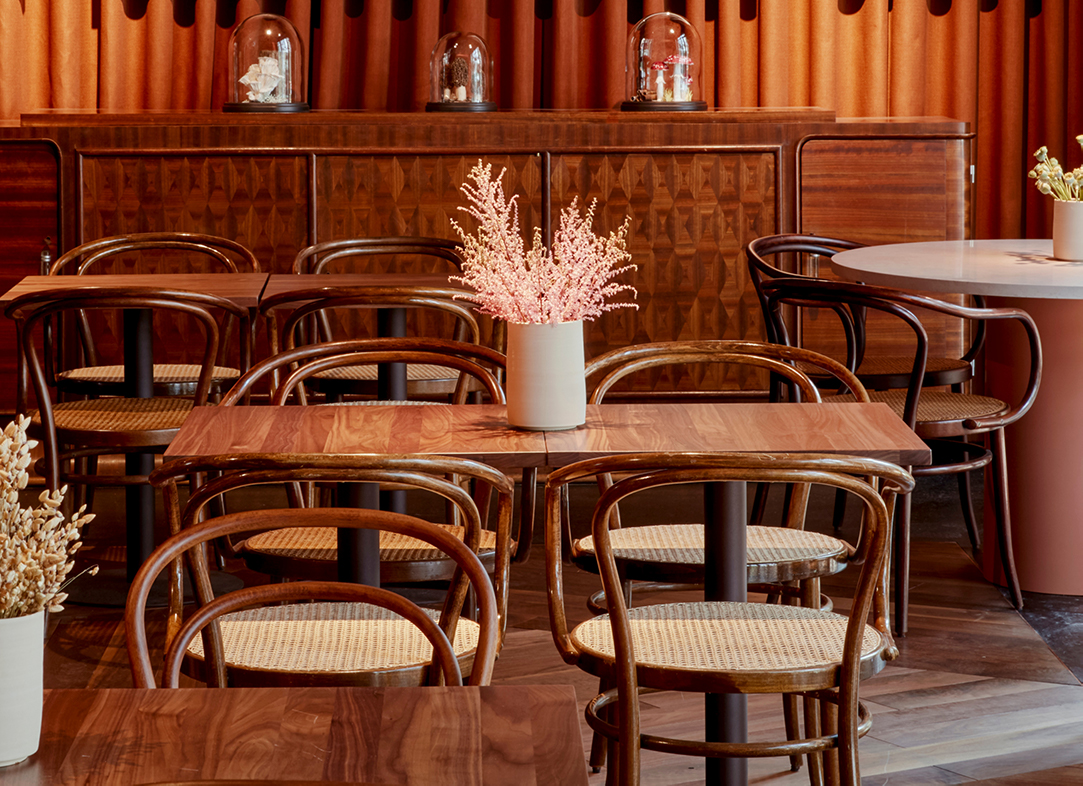 For the shared kitchen we used simple Scandinavian tableware by Nordal.” Jansen and his interiors team find trend-spotting trade fairs important as they look to develop more co-living accommodation for the hotel group. “Fairs provide great inspiration. At Ambiente I’m always discovering lovely accessories – and recently also sustainable wallpaper, with exactly the character we were looking for.” Nils Jansen cites the freedom small hotels have as an advantage: “They have way more leeway for design than hotel chains do. And in our case we can go to completely different places, such as the major shopping areas, where the trade presence is set to grow in future and there’s room to grow and change – the age of large department stores is over. The key for us is connecting with guests. For example, people in Frankfurt will discover us once those great book events are revived.” Perhaps Frankfurt’s famous shopping street, the Zeil, will be one of the places he goes. The city authorities are currently rethinking the street as part of a new master plan. 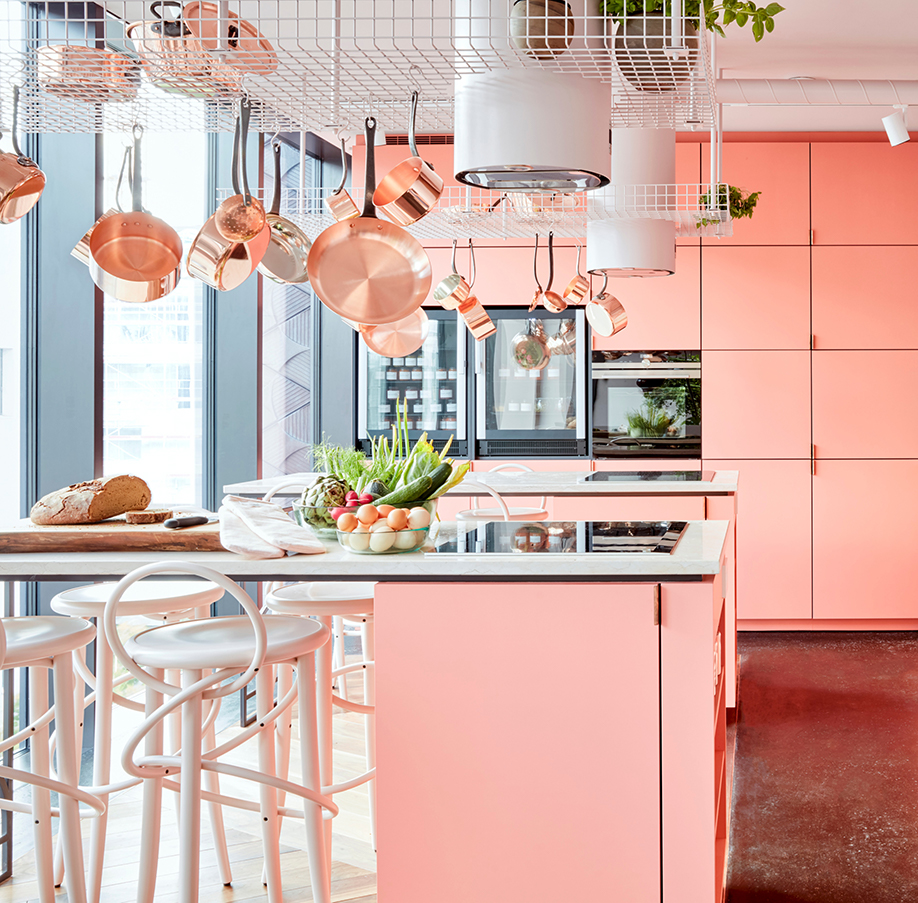 Hello stranger, let’s live together! The world is reinventing togetherness. Co-sharing, co-creation, co-working and co-living are current trends making new types of collective experience possible. Many of us happily left temporary flat shares behind in our student past and moved into a hyper-individualist period. But now lots of us are feeling a new desire for analogue togetherness and communication. Collective experiences are gaining immeasurably in value. Co-living is an answer to the way a whole generation feels, valuing freedom over ownership, valuing sustainability and community. This is more than just a reaction to the housing crisis – co-living is a collective state of mind. It’s certainly something that can stave off the loneliness in city living. Nils Jansen of the Lindley Lindenberg says: 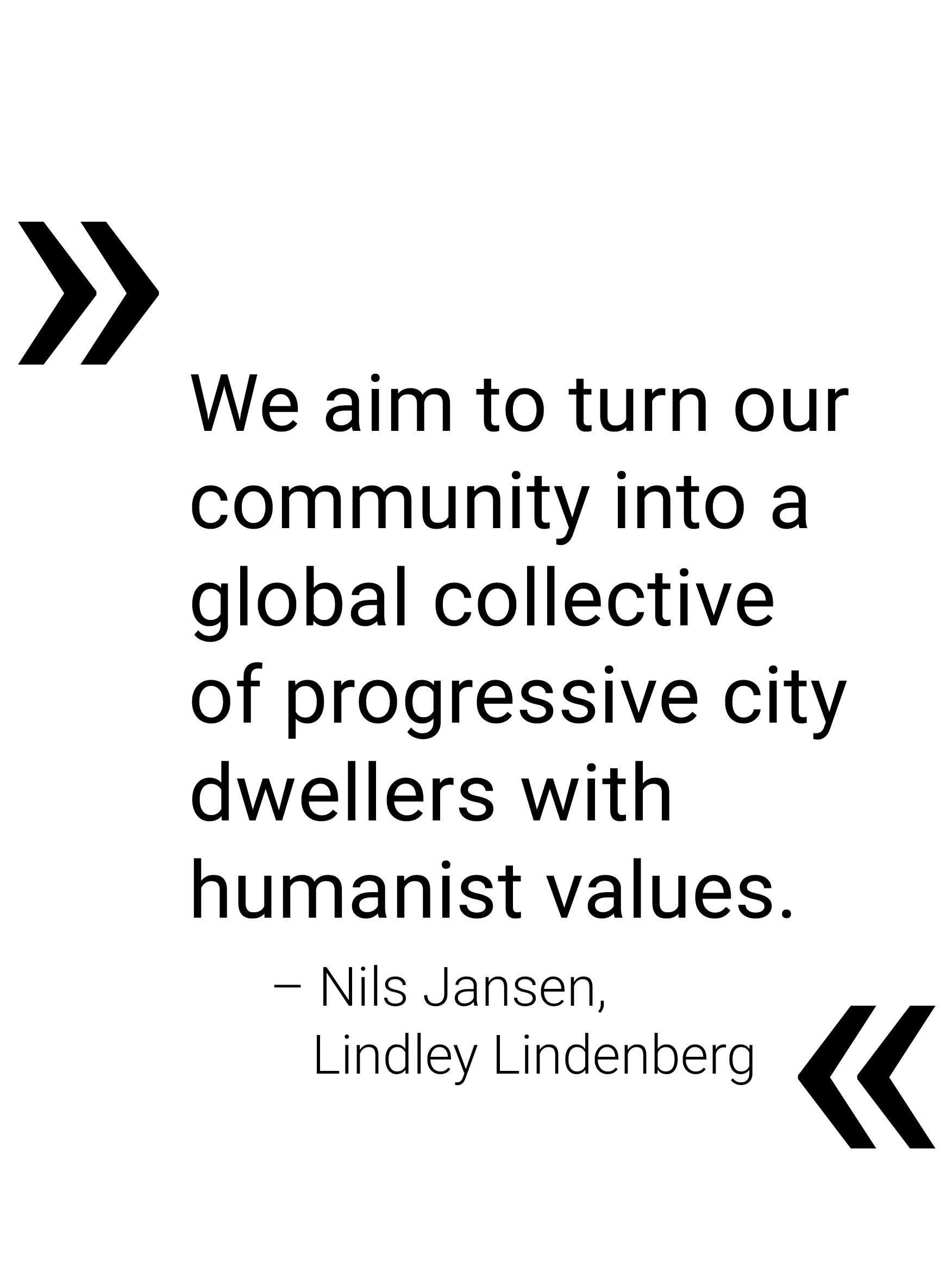 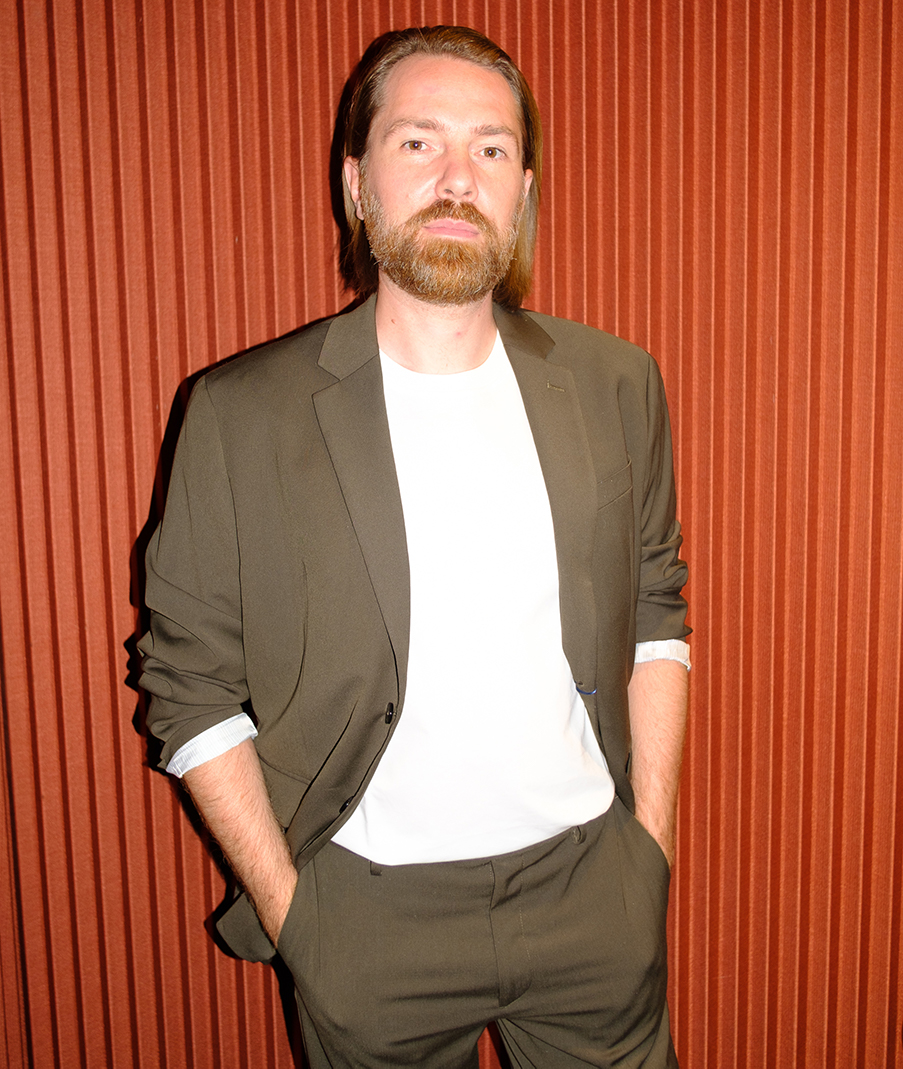 It all started with co-working, but co-living takes it to the next level. This mixes living and working while carefully, sometimes expensively designed spaces offer a harmonious shared experience – in which either the hotel or the collective of residents offer their design expertise. This trend has great potential, especially as the proportion of single-person households is constantly rising. According to property consultants Cushman & Wakefield, 44% of households in Germany will be single-occupant by 2035. Yet it’s not everyone’s desire to live alone; some people want company. Germany is also the fastest growing market for students in Europe, with some three million students already. What is more, increasing urbanisation of the populace is pushing up demand for living space in cities. And despite social media, sources of social contact are in decline – so places are springing up to fill this gap, in real life. 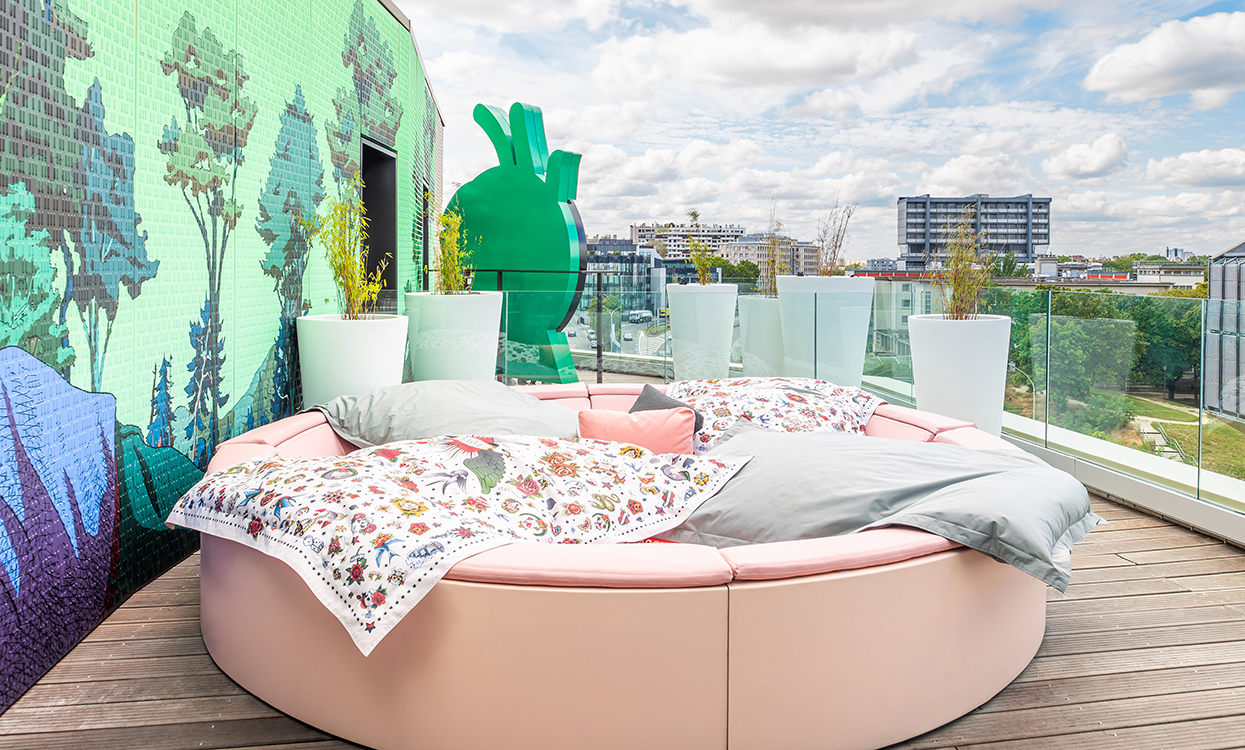 Co-living is an attractive arrangement for digital nomads who can work anywhere and don’t want to be tied to a particular place. It’s great if you’re new to a city and can afford to let someone else worry about the bills, maintenance, internet connection and cleaning. This is also a model which appeals to traditional hotel chains aiming to expand their product portfolios. Many of them have already identified this significant potential and offer blended living (mixed-use) solutions, such as the Open House concept at Jo&Joe by Accor Hotels, lyf by Ascott or the Ruby Hotels. Essentially these establishments are a blend of hotel, hostel and ‘resident rooms’. The local population is welcome to visit their roof terraces, bars and gastronomy with 24/7 eateries for a special blend of fellow feeling, covered by a single motto: ‘The whole city is part of our hotel family’. 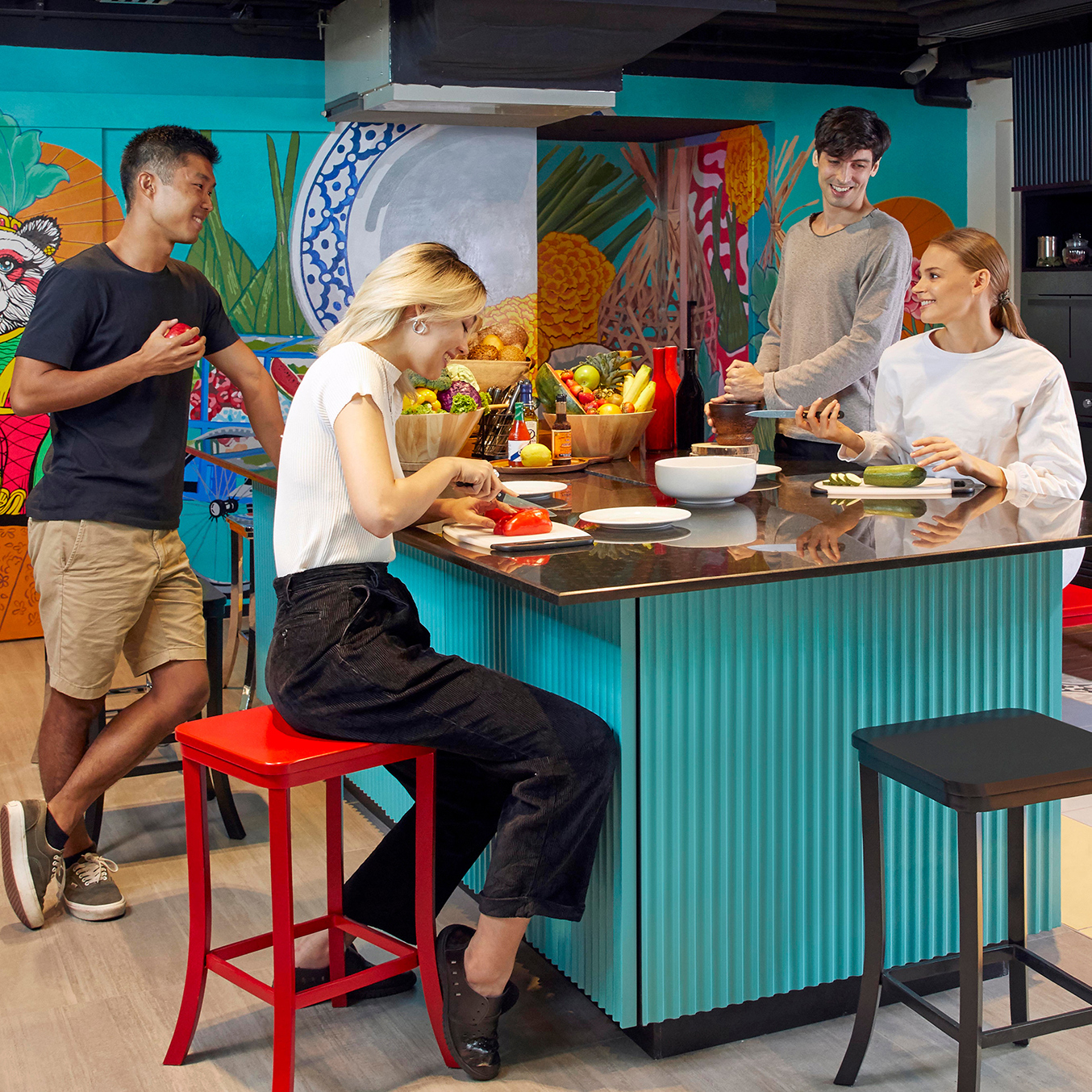 The key to success with blended living is always the interior, which depicts the building’s particular personality – and often tells an interesting story too. It will mix statement furniture and lighting with plants and local contemporary art. Souvenirs of a bygone era and casual accessories combine to give an avant-garde, or even playful impression. The tableware and settings are functional but refined, and often adorned with unique pieces of art or furniture. In short, they combine the functional bonhomie of a student halls of residence with the sophistication of a boutique hotel. 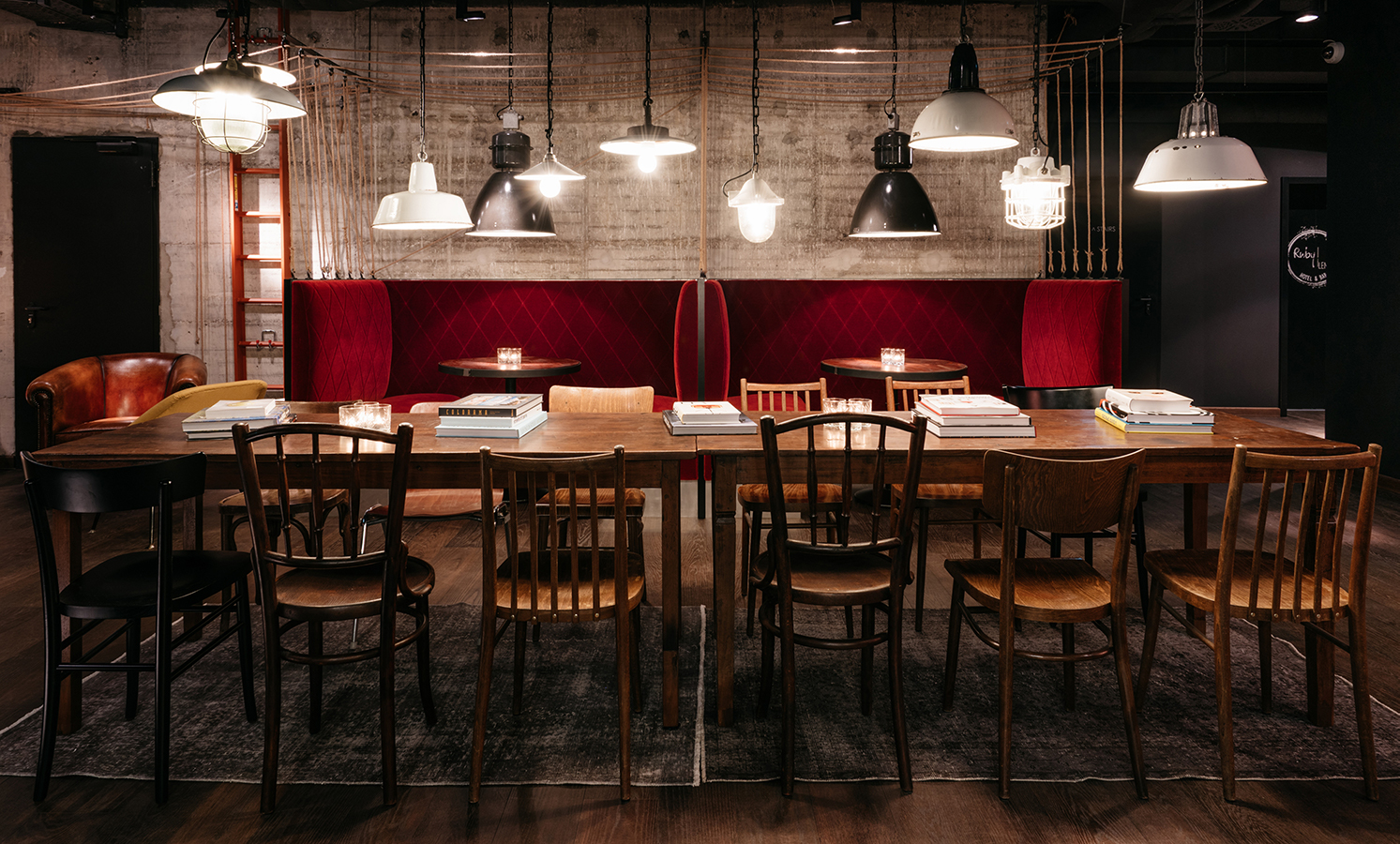 In a world where a journey can be characterised by the quality of the traveller’s personal interactions and encounters, hotels are opening up to the wider fabric of the city. Check-in often takes place at a hotel bar, reception rooms are larger, and the local population is welcome to come in for a drink. That’s certainly the case with the newly opened Hobo hotel in Stockholm. Its inner life is designed to promote social interactions and exchanges between local residents and hotel guests. The Hobo’s pared-down Scandi cool attracts hipsters from around the world, while the bar, cafe, restaurant – and pop-up areas hosting creative start-ups and artists – also cater for locals. Its furnishings and an exclusive lighting range are by German architect and designer Werner Aisslinger – his signature style can also be seen at the Michelberger and the 25hours Hotel Bikini in Berlin. Incidentally, the Hobo hotel’s taps are the world’s first made from clay. 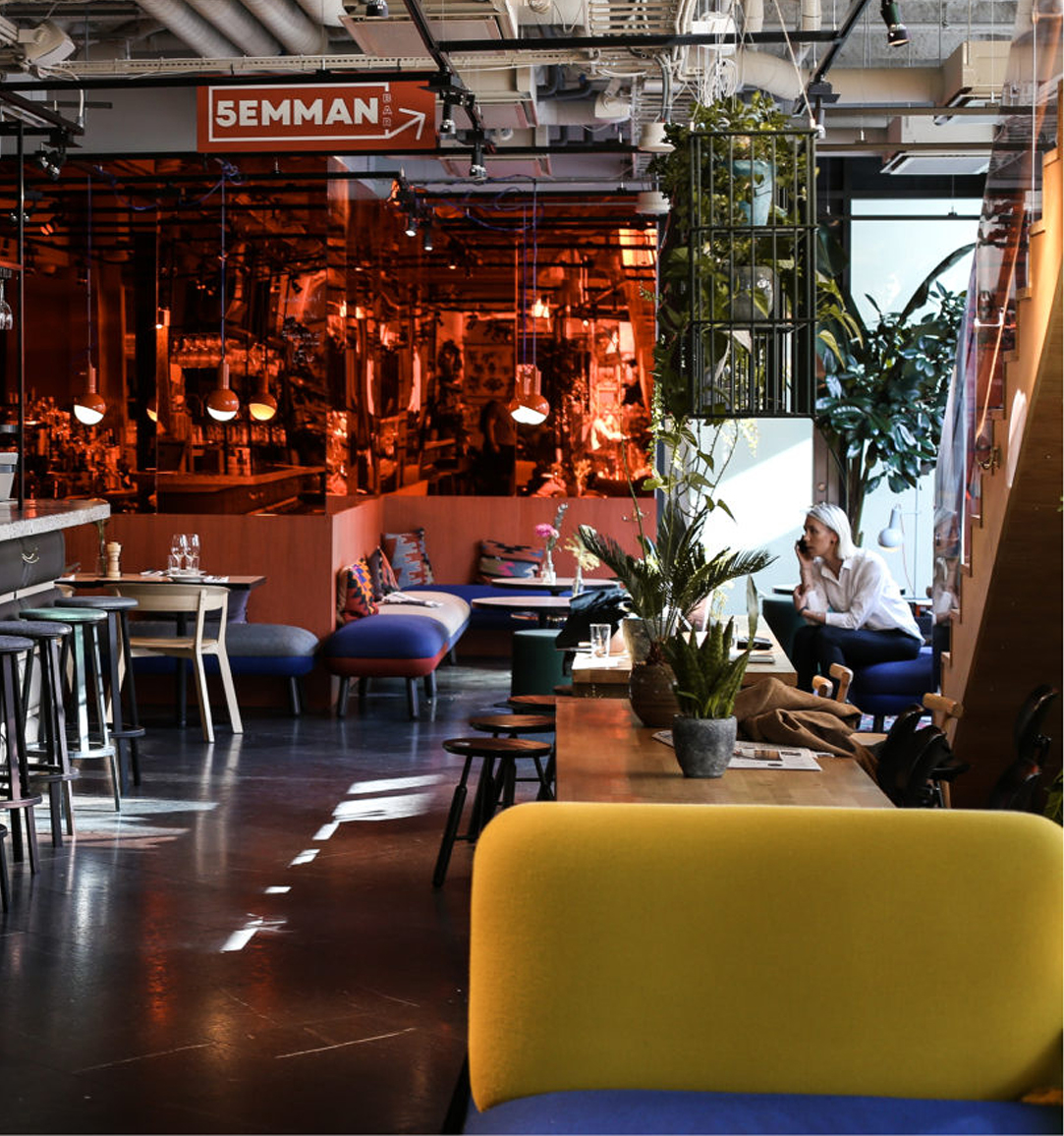 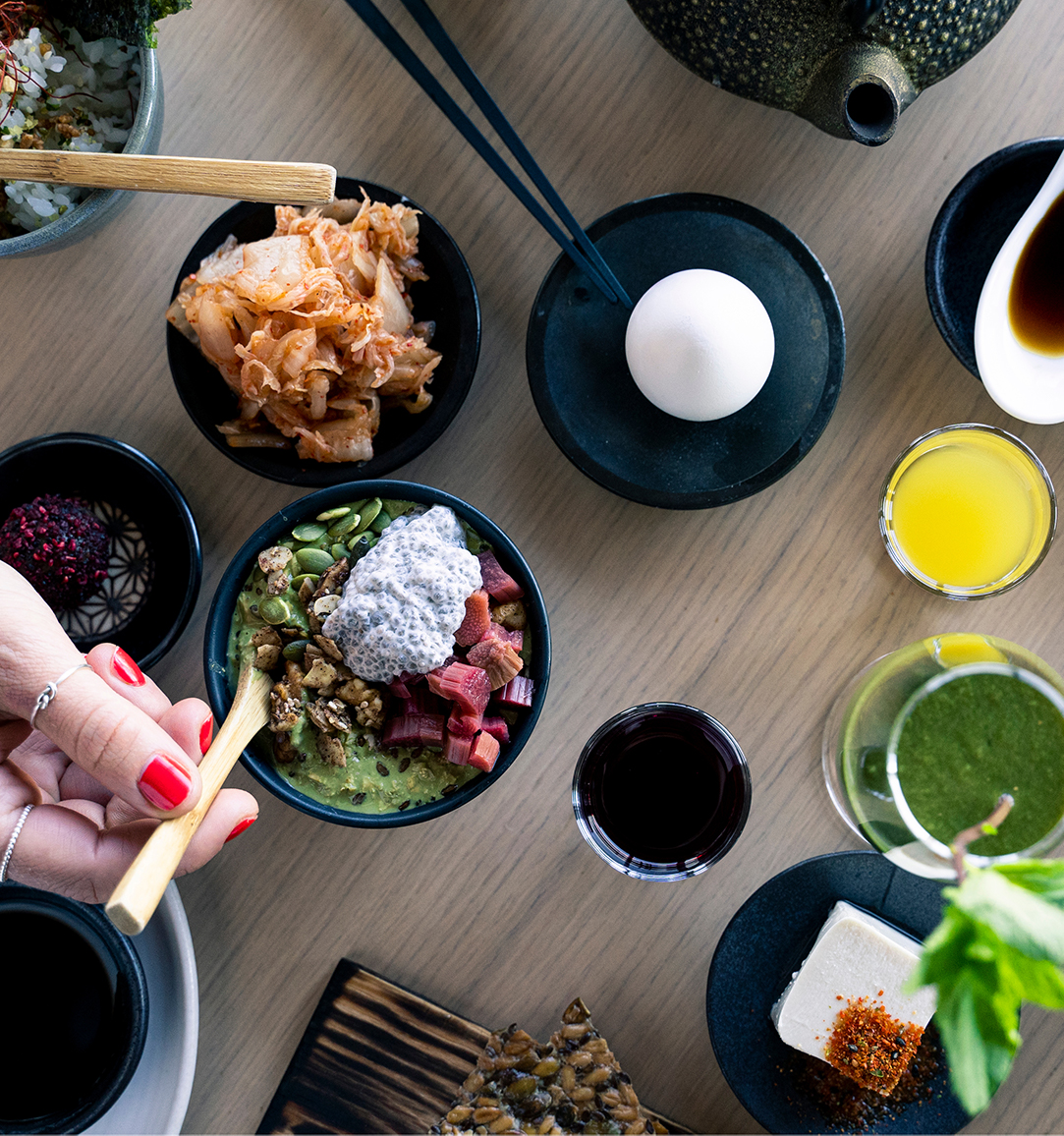 Stockholm certainly has plenty of well-designed hotels, but with its restaurant explicitly inviting the locals to join in, the Hobo has also made itself a place of welcome and interaction. Locals can meet tourists, and tourists get to know locals – inspiring interactions that would otherwise only occur in small pubs, cafés or parks. The same clientèle is also likely to love Birch, the latest such place in Hertfordshire just north of London – a mixture of hideaway, hotel and members’ club for the Instagram generation. Birch is counting on ceramics workshops and bread baking to bring in the locals, preferably on a regular basis. 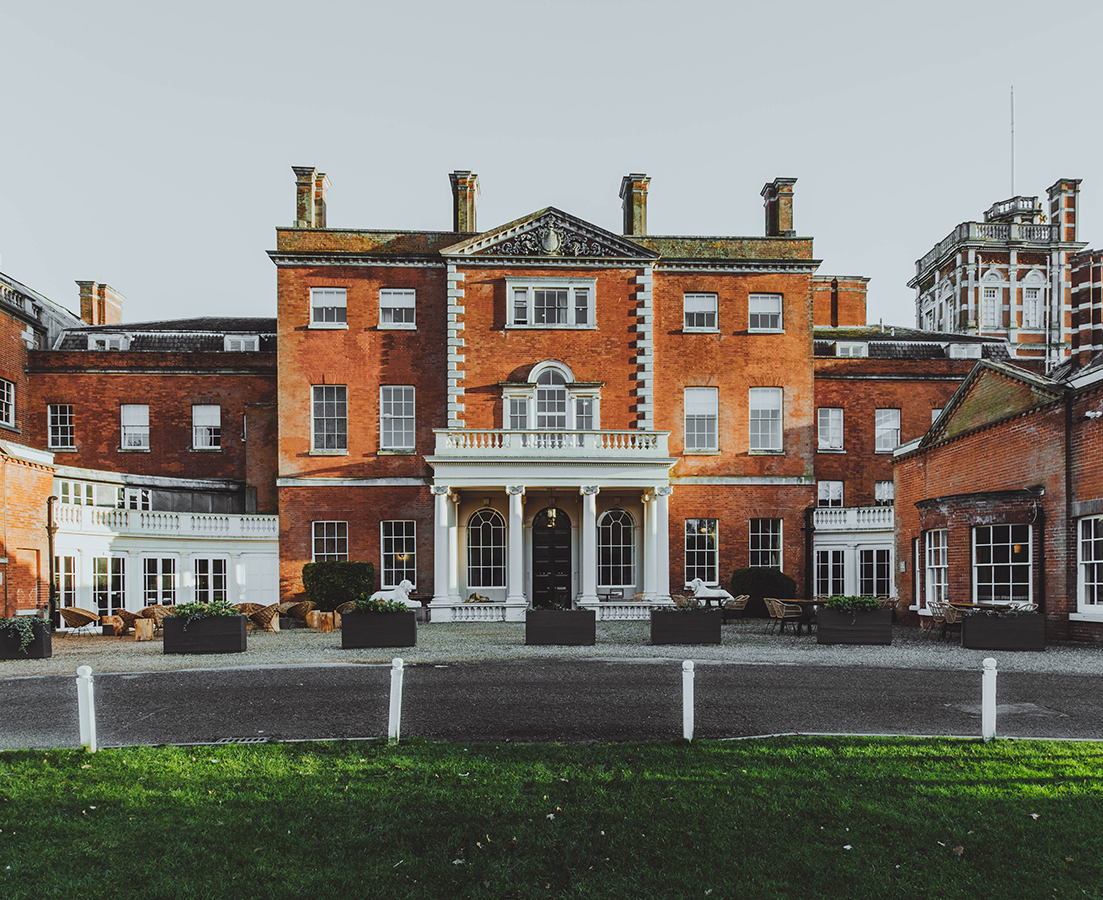 Sharing dishes: All round the same table!

Eating together has taken on a new significance in gastronomy which is likely to last, as James Ardinast observes: “There’s a new awareness, not just of consumption but also of concepts”. James and his brother David run the Bar Shuka restaurant in Frankfurt. Both celebrate modern Tel Aviv cuisine, with oriental aromas and regional ingredients. This is sharing dishes in its purest form. Stylish plates, small bowls with delicious dips, and platters of meat and fish are placed in the centre of the table to create an intimate, companionable atmosphere. James Ardinast says “For us, this is not just a journey back to our roots, it is also a lust for life which we carry with us”. This seminal concept has fallen on fertile soil in Frankfurt. The restaurateur says food holds a new place in our esteem, especially in Germany. “Traditional family structures are breaking down and people are looking for a sense of belonging, including at mealtimes.” The Bar Shuka is aimed at both tourists and locals, forming part of the 25hours hotel The Trip. 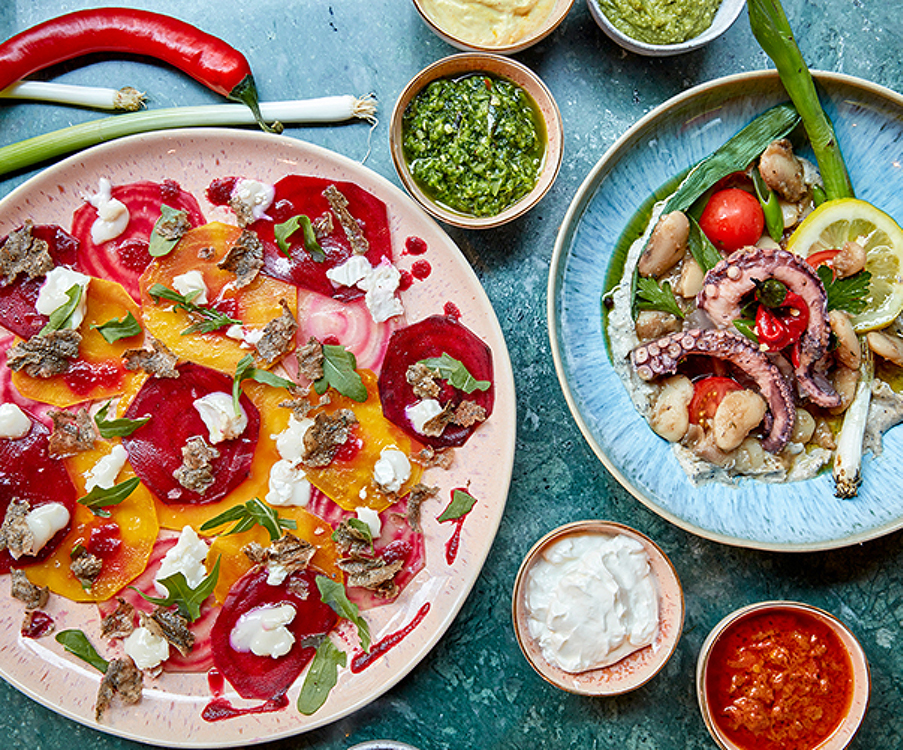 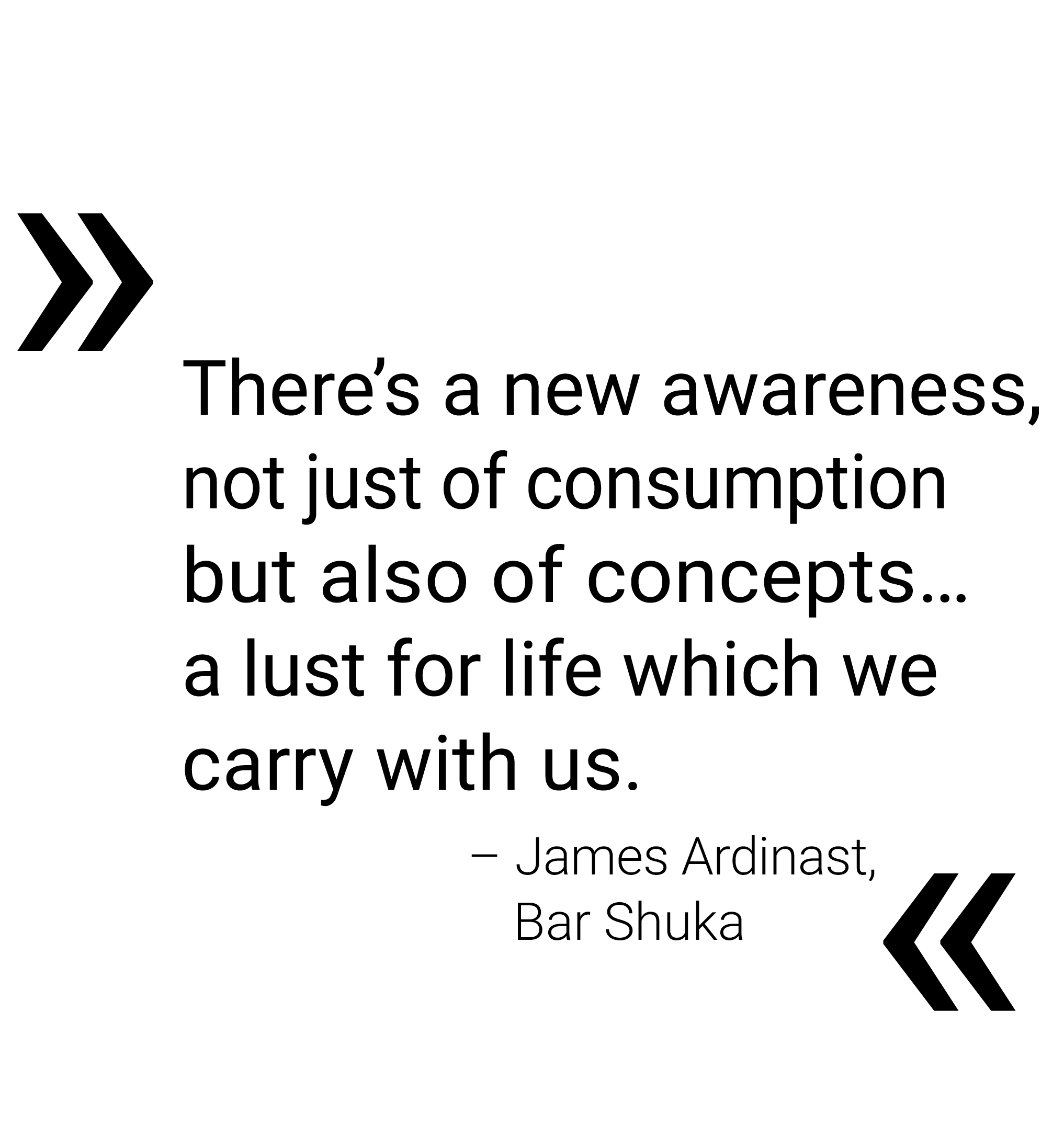 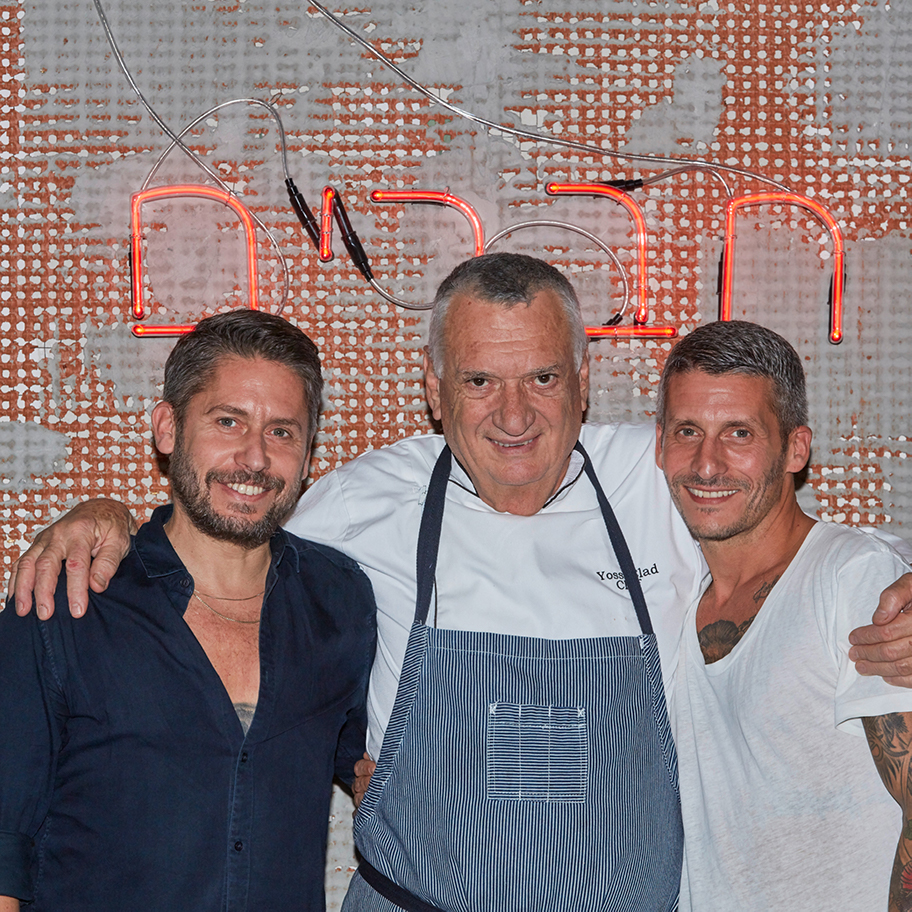 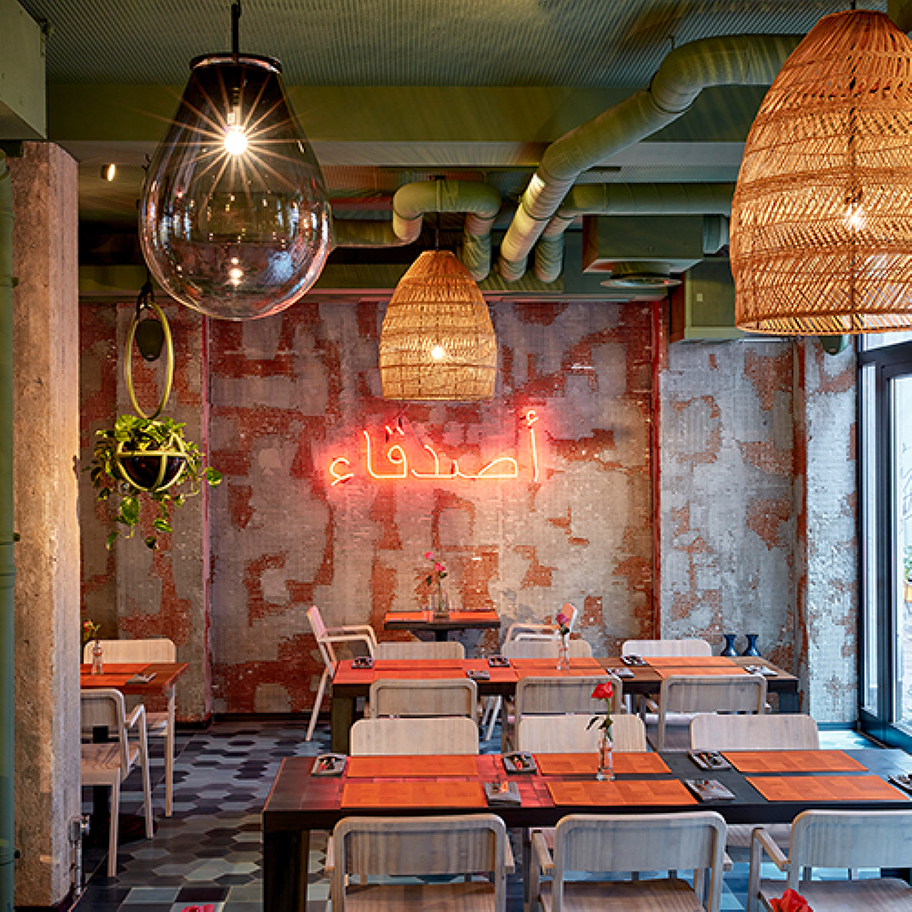 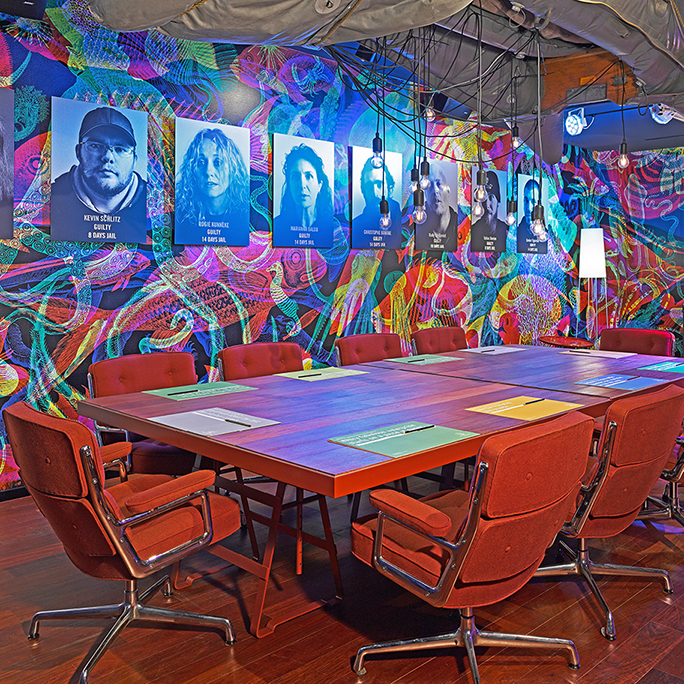 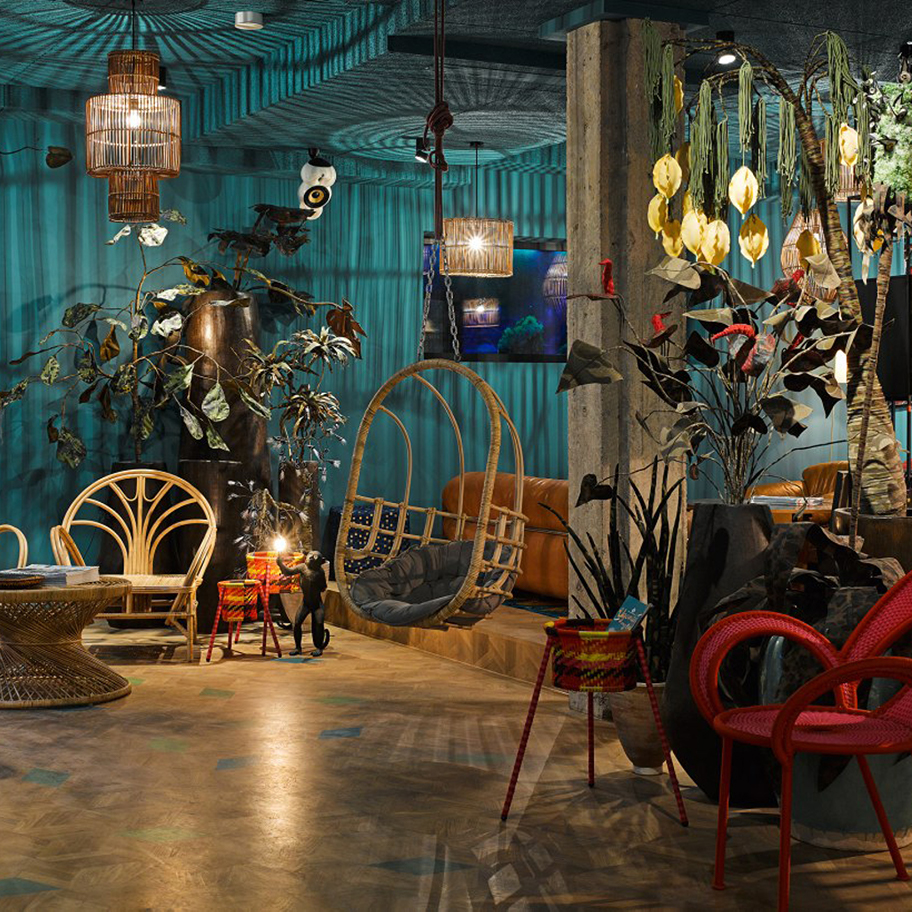 Amsterdam’s prize-winning Zoku is also imbued with the wish to commune and share ideas, knowledge and experiences in its Social Spaces. This is a large city-centre building, and has a glazed rooftop terrace and garden with a view. It allows for complete self-sufficiency, whilst offering an innovative style of compact living, which creates the ideal home/office hybrid – Accompanied by the service one would expect from a hotel. 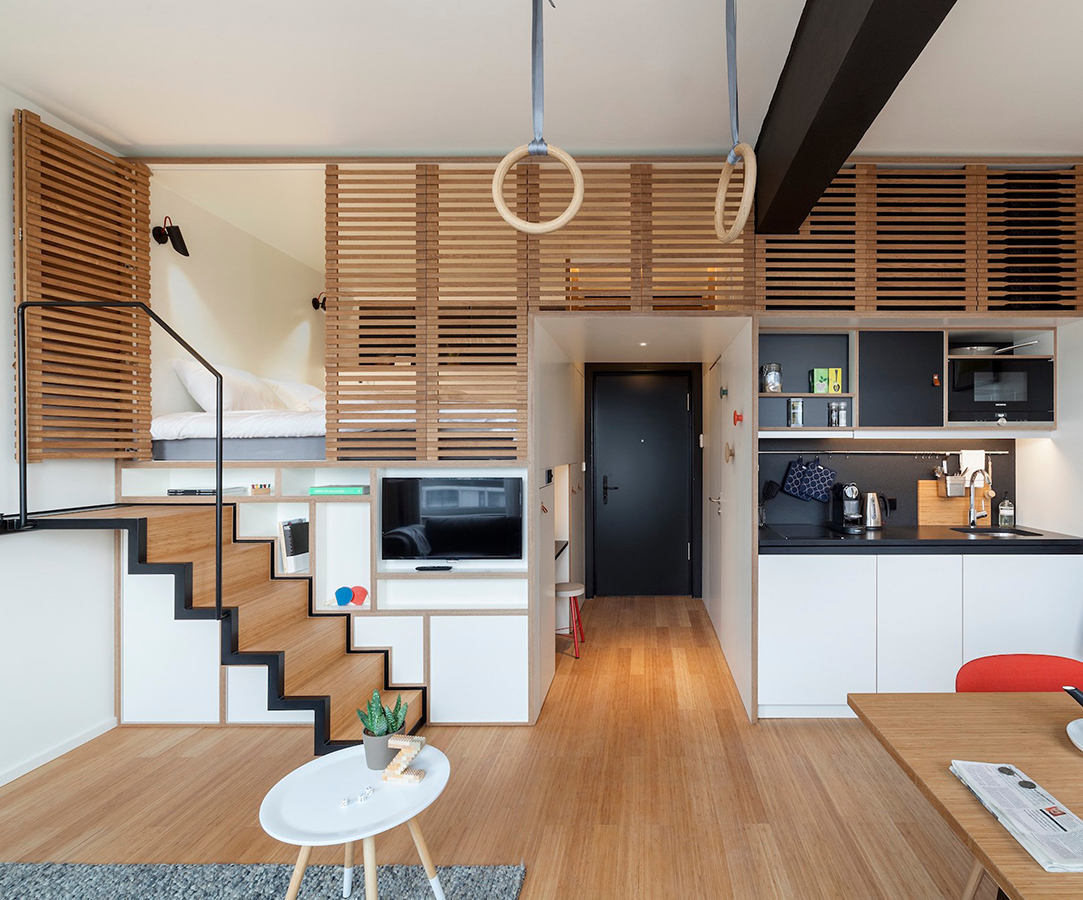 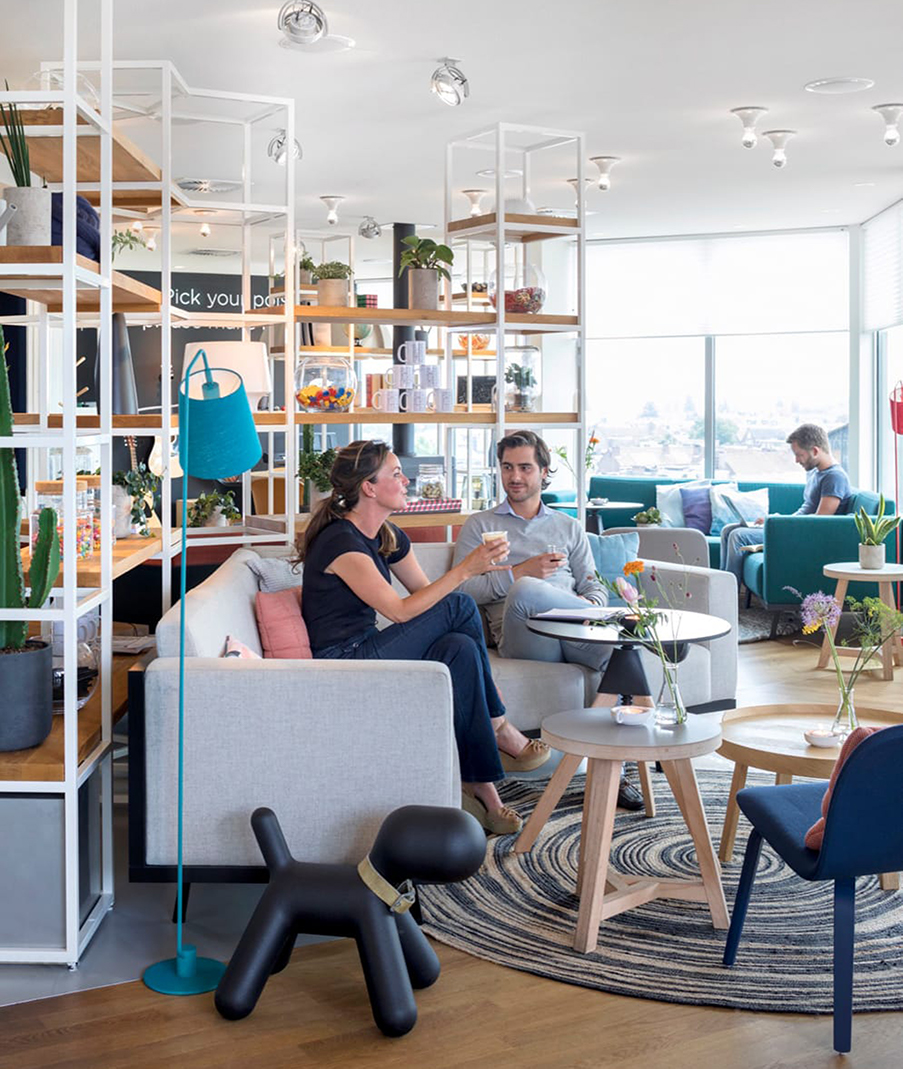 Co-living is here to stay

Increasing numbers of hotels now house cafes and restaurants, theatre and concert stages, which all bring people together. Our idea of luxury has changed: it now involves being together and being attentive. Lots of micro and macro trends show that co-living in HoReCa will mix things up just as much as co-working did – precisely because it’s an idea that works so well with conventional hospitality offerings. Nils Jansen of the Lindley Lindenberg believes the future for being together begins today. “It’s at times of uncertainty and crisis like this that humanism and community endure.” It’s pretty certain that the co-living model will increasingly influence the hospitality industry, and therefore change the inner life of many hotels. The hotel becomes a second – or only – home and is outfitted accordingly: with casual comfort, intuitive design, original accessories and digital amenities. The aim is to create a stimulating environment, with clean lines and sharp edges but unmistakably inviting. My home is my hotel!

Efficient digital ordering – all year round.

Ordering complete assortments, novelties, and promotions of Ambiente exhibitors at individual freight and price conditions? It's possible on nmedia.hub. Register now for free.
Go to nmedia.hub

DAILY WRAP 4: A Union of Jack, Friends, and Teatime