As winter colours creep across the countryside, back indoors we feel a growing urge to bake. We long to knead dough made from a few simple ingredients. Fresh from the oven, baked goods are the smell of home comforts amid a circle of friends. Our Ambiente Talents Sara Cirillo and Magdalena Majnusz love that aroma, and prove what a rolling pin can do when it’s just right for the cooking traditions of their respective countries.

Rolling pins reloaded – from Italy
Is it art or can you use it? We pick up the slim cylinder by designer Sara Cirillo in our hands and roll it around, mystified. This Italian artist recognises the situation and explains what her prototype does. What a lovely surprise! We learn that it’s a rolling pin with special effects. The shiny cylinder from ultra-light aluminium can be made airtight with two hemispherical silicon seals. Sara explains the ‘secret compartment’: “Depending on the sort of dough or pastry, you put either warm or cold water inside: that makes it easier to work.”

Roll model
By contrast, the unmistakeable Italian design of this rolling pin is no secret. It’s experimental, elegant and yet as down-to-earth as a dirt road in Tuscany. Good dough is both necessary and desirable in Mediterranean cooking, as Sara Cirillo explains: “Designer Fabio Montini and I were looking for a tool to symbolise our cuisine, and we came across the rolling pin. Every household has one, but we wanted to reduce the object to its aesthetic essentials and give it a bit more functionality.” The body comes in grey, metallic or black – all colourways that underline the clean aesthetic still further.

Biscuits and games: Kitchenware from Poland
We played another guessing game here. At first, the puzzling wooden creation from Polish designer Magdalena Majnusz looks like an educational game for children. There’s a pile of discs with shaped edges, some short handles, and cubes with graphic patterns. Then we see the rolling pin and know what the discs are for. These pieces are used to make noodles and filled dumplings. The cubes are fun biscuit stamps. The young designer explains “You can make it a game too, I want to get people animated and looking beyond the end of their own noses. Often an object has more than the one use.” The chopping board with built-in mortar well is suitably multitalented, useful for preparing fresh and dried herbs. 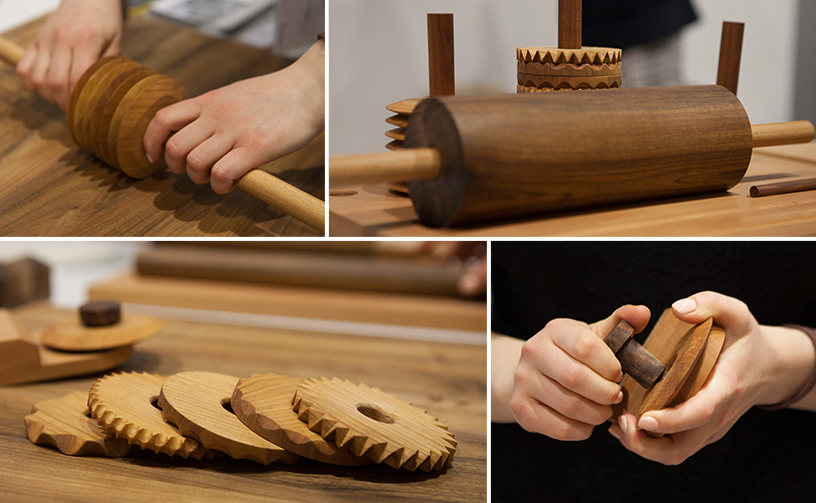 Cooking together, eating together
Magdalena Majnusz talks about her home country: “Preparing food together and cooking for big family occasions is a key part of traditional Polish cuisine. The utensils and typical recipes inspired me. My kitchen equipment is an invitation to experiment, and being multifunctional is an integral part of it.” The designer recalls a former professor in Poland whose research got her really interested in working with wood. Indeed, if you want to see fairytale primeval forest, you only have to travel to Poland. Wooden objects are a tangible link to their sense of homeland.

You have to see for yourself how the designer and her friends use their fine utensils to prepare a typical Polish speciality. In the video, the good-humoured group shows how to have fun while making tremendous pastry: