Cédric Ragot was one of the greatest product designers of our time. He won many awards and produced some genius designs, leaving out anything unnecessary, be it mass, volume or optical weight. The French designer died just a few weeks after he visited Ambiente 2015. The day before the fair, we met him for an interview and talked about inspiration, transience and cats. We remember him in this Ambiente blog.

“Too big for one day”, sighed Cédric Ragot shortly before the opening of Ambiente 2015. One day is certainly not enough to see the whole of the world’s top consumer trade fair. Yet sadly that’s all the time Ragot could spare in Frankfurt. We settled for a chat on a comfy sofa at the Roche Bobois showroom in Frankfurt: a sofa he’d designed. Nobody could have guessed that this would be one of his last interviews. This talented designer died suddenly on 23rd March, at just 41 years of age. We found him reserved and clever, with a pleasingly subtle sense of humour. He looked significantly younger than his years.

A legacy
Cédric Ragot leaves behind him some truly great work. He was at home in every area of design, from mass production to specific individual products. Big-name manufacturers like Panasonic, Paco Rabanne Fragrances, Swarovski and Rosenthal knew and valued his designs. For Krups, Ragot created various products, including the 3Mix 5000 hand mixer, which won the prestigious Red Dot Design Award in 2012. An insulated bottle made from potato starch for Veuve Clicquot, a stay-cool carry case for Häagen-Dazs ice cream and many more experimental creations bear his signature. Various of his furniture and interior designs are on show as part of museum exhibitions. Cédric Ragot was a recognised master of his art. At 29, Ragot already had his own studio, having graduated from the famous Paris design school ENSCI-Les Ateliers.

Grey and it’s nuances
Ragot told us grey was his favourite colour; that was the colour of the couch we were sitting on. A leather couch like a wild elephant – a real presence, both strong-willed and sensitive. This sofa was tough and had lots of personality. Naturally, it was Ragot’s design, both strong and futureproof. “I try to tell a story with my furniture; every object has a tale to tell”, he said as he stroked the smooth cowhide. Deciding on a settee for your own living room is one of the most difficult decisions, even Ragot finds it hard. “After all, a couch is basically more architecture than furniture. Hence this architecture must be situated within the other architecture, a small part of a larger whole – a work of art.” 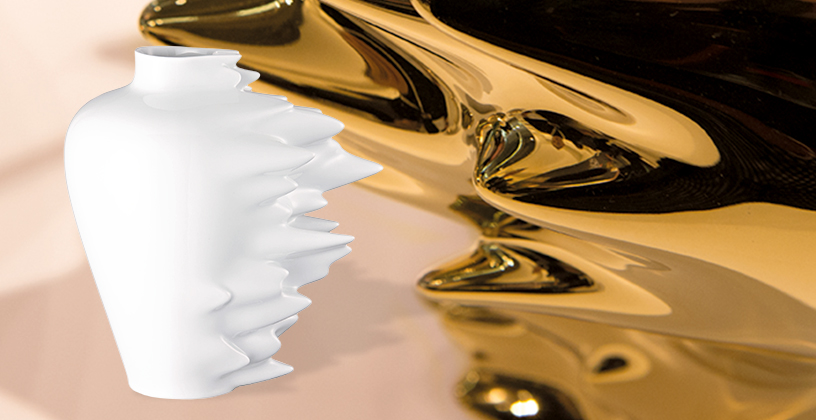 Time lapse
Cédric Ragot also had a talent for bringing yesterday into harmony with today and tomorrow, without compromises. Ragot’s ‘Fast Vase’ collection for established German firm Rosenthal is proof of that. He explained his Ming Dynasty-inspired porcelain vases: “Frozen in digital acceleration. I see them as a sort of time-lapse portrayal of the rapid cultural change that’s occurred over the past 500 years. At a deeper level, the vase of course represents impermanence and thus the transience of all existence.” Very thoughtfully put. This unusual design, which made into mass production, won Cédric Ragot the oldest and most sought-after design prize – the GOOD DESIGN Award, which the Chicago Athenaeum Museum for Architecture and Design has presented since 1950. It’s something the designer was particularly proud of. 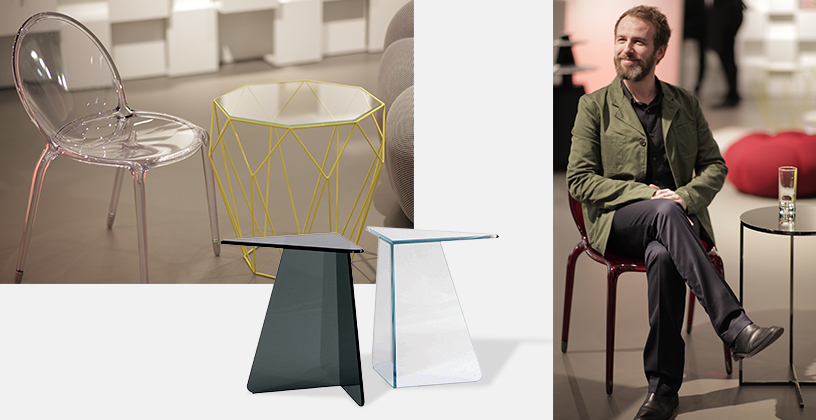 Silly cats
What has a silly cat got to do with a glass table – or more precisely a dining table, side table and console desk? We were determined to find out, and our designer was as amused as we were bemused. “The glass table surface is fixed with silicone. So it’s a play on words: a bit like silicone, a bit like a cat. That’s why we ended up calling the whole Roche Bobois table series ‘silly cat’. And the name sticks, doesn’t it, a bit like silicone?” We’d forgotten to ask if he had any pet cats, who might have watched him in the studio – as cats often do – patiently and persistently. But no matter. We also forgot to ask him what made him happy. If you’re not aware that you’ll never meet again, because death will intervene, then it’s easy to put off the really key questions. “What inspires me? Everything’s an inspiration if you are open and in the right frame of mind. That’s what happens to me.” This credo was important to him, and we see that as a kind of happiness derived from his work. He talked about his wife and daughter too. “Too big for one day” was what he felt about the creative cornucopia at Ambiente 2015, which now sounds as if he knew the premature fate that would soon befall him. There are some ideas and plans which are too big for one life, but Ragot’s stories remain.

The renaissance of arch design.