What happens when modern European design meets traditional southern African weaving? All will be revealed at Ambiente. We will be showing the products which emerged from two workshops held by designers Matali Crasset and Sebastian Herkner in Zimbabwe. The Basket Case II project approaches sustainability from a unique angle: it merges apparent contradictions, with fascinating intercultural outcomes in terms of product design.

Sebastian Herkner studied product design at Offenbach University of Art and Design, where he took an interest in merging traditional crafts and production techniques from many cultural contexts with modern design. It was around this time that he was an intern with Stella McCartney, providing an opportunity to experiment with materials, colours, structures and textures. This experience still influences his multi-award-winning creations for big-name manufacturers. Another major influence on Herkner is the question of sustainability. “It was always reflected in my choice of materials and production methods. The project in Zimbabwe is doubly sustainable, as it contains both social and intercultural components.” 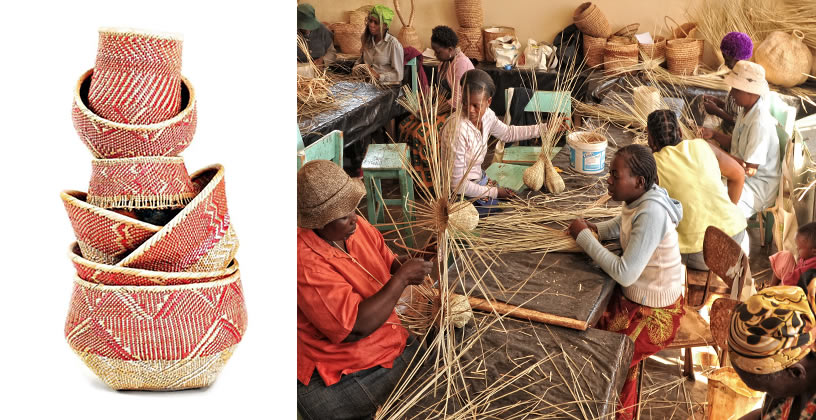 The project’s two workshops, launched by the European Union National Institute of Culture (EUNIC) Zimbabwe, attracted Matali Crasset for the same reasons. This French designer with a studio in Paris, who writes her name all in lower case and whose portfolio encompasses architecture plus industrial, interior and graphic design, defines her work as a never-ending quest and voyage of discovery. There is certainly much to discover in Zimbabwe. The designers from Paris and Offenbach came together with other European design teams at Binga Craft Centre and Bulawayo Home Industries to meet basket weavers who helped them understand the signature weaving style of their respective regions.

Sebastian Herkner recalls: “At first glance there were many contrasts between us, because conditions in Europe are very different. Yet over the weeks I spent in Binga, I also found common ground and shared values. I wasn’t aiming to force my own designs onto these traditional baskets and woven containers. Instead, we developed a shared language out of our dialogue with one another. What I wanted was to integrate colourful fibres into the traditional shapes and patterns. This turned out to be tricky, since there was nothing like that available locally. In the end I chose fibres from food sacks, which normally are only used once. These bright artificial fibres were woven together with the natural fibres to create new baskets.”

The cultural impressions which emerged from the spring 2014 workshops were by no means limited to craft and design matters. Herkner stresses this: “I think the main thing we took away was something about being human; we learned that contentment and responsibility are very different in Zimbabwe and in Europe. The interactions between us were very friendly and positive.” The designer remembers in particular how the women broke spontaneously into a song or dance while they were weaving: “Those were definitely the most stirring moments”. 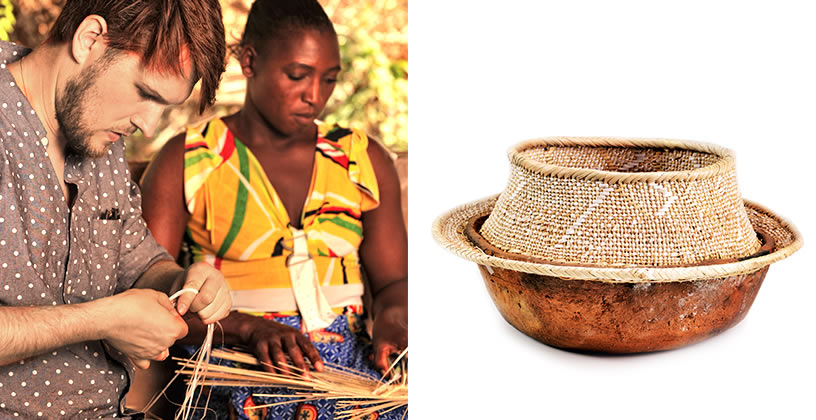 This shows how, as Herkner mentioned earlier, Basket Case II was sustainable in two different ways: socially and with regard to environmental technology. It did mean the scope of expected results was broader: “Initially, the aim was to bring the project to Europe and present it here at Ambiente,” says Herkner. He now also aims to open up a new market for the women and their wonderfully crafted Zimbabwean art. And not “merely” for social reasons: primarily due to the quality of their work. “The special thing about these products is that they’re all handcrafted. A basket takes unbelievable expertise, from gathering the natural fibres, cleaning and preparing them, to weaving them together – which can easily take a week. Each object bears the signature of the weaver, her regional tradition and her training. At the Binga Craft Centre where I was, over 1,000 women work producing baskets and this may be their only opportunity to earn money.”

The African/European items created as part of Basket Case II are not only on show in Foyer North in Hall 11.0, direct orders can also be placed for these products during Ambiente. The stand shared by the two Zimbabwean craft centres is situated in Hall 10.1.

Co-living: At home in a hotel.