What’s the secret behind design classics? Why do some products become established style icons, while others get left behind when the winds of fashion change? How will we ever know? Somehow it always comes down to creating a balanced and well-planned relationship between aesthetics, functionality and quality. Where a design works, it stands out – and the object in question becomes our lifelong companion. That’s when outstanding design quality really pays off.

Beauty in waves
The wide sweep of an undulating shape, a vase with a silhouette said to mirror Finnish lakes: the Aalto vase is like an old true friend. In 1936, Alvar Aalto and his wife Aino created the famous asymmetric vase. It’s no exaggeration to say this is now one of the most famous glass objects in the world – also known as the Savoy vase, as it was originally designed for the up-market Savoy Restaurant in Helsinki. The vase was presented in 1937 to a wider audience at the Exposition Internationale des Arts et Techniques dans la Vie Moderne in Paris and has been in constant production ever since, with Finnish glass manufacturers Iittala reproducing the original design. Seven people make these hand-blown, one-off pieces in 12 different steps. The result is of astounding quality, and presented in an attractive range of contemporary colours. The latest look is inspired by desert sand.

A feast for the senses, even without any flowers: Aalto has deliberately avoided giving instructions on how to arrange flowers in his vase. Each owner uses their vase as they see fit: its irregular shape opens up a wealth of possibilities, which needn’t necessarily include flowers. 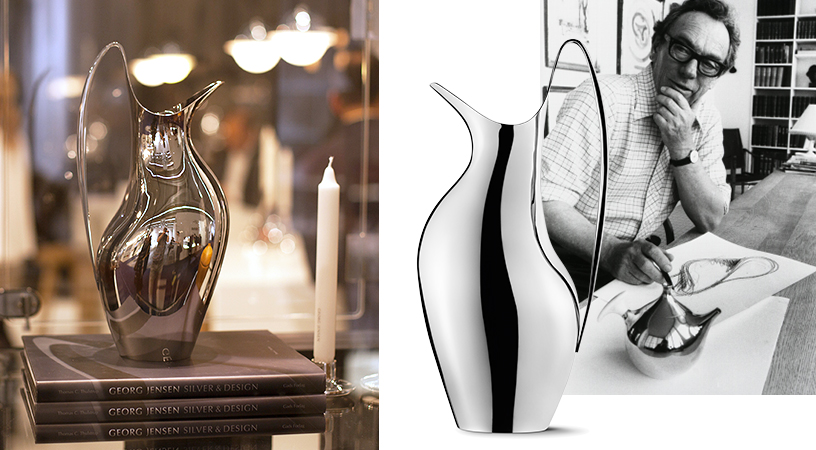 Fine curves
While the Aalto vase and its undulating organic forms mimic the gentle movement of water, this fine Georg Jensen carafe boasts a neater design, still sensual and even exuberant, stretching up towards the light. Our jug with the striking spout was first made from silver in 1952 to designs by Henning Koppel. Since 2008 it has been produced in two different sizes of polished steel. It is part of the Masterpieces collection brought out to celebrate Koppel’s 90th birthday, which includes other favourite pieces from this stylish designer. The carafe is also part of design history; it represents both outstanding artistry and timeless Scandinavian style. This object effortlessly adds refinement, wherever it’s displayed.

The ideal shape for the masses
Where do form and function combine for ultimate viewing pleasure? Undoubtedly objects from the Bauhaus come to mind. Many of these products enjoy a well-deserved reputation which has endured, while others are experiencing a revival. While the renaissance of the ‘Max und Moritz’ salt and pepper shaker by Wilhelm Wagenfeld goes back some time now – WMF has long offered the reissue in its standard range – this is still a good example. A beautiful shape can hold its own in turbulent times and if need be find its way back to the top. The set comprising a small dish and two dispensers resembles a little boat with two passengers. Its clear design also extends to the Wagenfeld-designed egg cup and butter dish from the same range. Wagenfeld was Germany’s very first industrial designer, making sustainable and beautiful products for the masses in line with the Bauhaus philosophy. The first edition emerged in 1954/56 and for decades made its way into millions of German homes. After a phase of overexposure, Max und Moritz are now back in fashion here.

In great shape
Design for everyday use should be readily available and accessible, according to Heinrich Löffelhardt, who initially worked with Wagenfeld and then became a competitor. He was a proponent of ‘good form’, as he felt industrial products in particular must take a form that really was worth replicating. This sculptor set great store by his products being beautiful from every angle. His rounded everyday china range Form 2000 for Arzberg came out in 1954: a classic which earned a permanent place in the company’s offering. This collection had a lasting influence, reaching far beyond the early post-war years to influence German dining over the past 60 years, and is still going strong. We have been on a voyage of discovery and now have a different perspective on objects we thought we knew. We have encountered them afresh as old friends, our constant companions with many and varied qualities which brighten up our everyday existence.