Cooking for free with the power of the sun: Ambiente Talent Bodin Hon harnesses an age-old principle in an all-new way. The portable solar cooker he’s invented was a big hit at Ambiente 2015, and contributes to climate protection. At #TalentsTuesday we lift the lid on Hon’s project.

Bodin Hon spent several years working as an engineer at NASA’s Space Center in Houston, and it shows. The young industrial designer presented this very ‘space age’ success story at Ambiente 2015. He’s from the United States but lives in Milan. At the trade fair he was surrounded by a crowd of industry visitors from all around the world. We walked amongst them, amazed by Hon’s very particular ‘picnic basket’. Bodin Hon has made a seriously cool solar cooker out of aluminium: a mobile, non-polluting means of preparing food. It’s called ‘Solari’. The design was created as part of his Master’s course at the Milan Instituto Europeo di Design (IED), and won him the international James Dyson Award for next-generation entrepreneurs.

Light sun worshipper
“More than 3 billion people in sunny countries still cook on simple hearths or open fires. The fuel this consumes is an immense burden on the environment. The smoke is also a hazard to their health.” The inventive Bodin Hon explains that the power of the sun, so readily available, can be employed to protect both the climate and human health. A closer look at his device soon shows how different it is from conventional solar cookers. Not only is the design more stylish and compact, but it’s also easy and fun to use. The key practical feature is the ‘stirrup’, a metal frame which acts either as a stand or as a carrying handle. The reflective interior provides the heat.

If need be with electricity.
“If the sun’s high in the sky, you can use the solar cooker anywhere. Of course it works best in parks, and on beaches or boats”, explains Hon. But can it really be used anywhere? Let’s be honest. Would the sunshine in, say, central Europe be powerful enough? “You can also connect the cooker to a source of electricity, so it’s flexible”, he says.

Then our imaginations start to run wild. It’s the height of summer in Frankfurt, the home of Ambiente, and we’re relaxing on the banks of the river Main with a Solari cooker. The first question is: What healthy dishes can we cook? “That’s where the Solari smartphone app comes into its own. Other Solari users recommend recipes on there”, says Bodin Hon of this universal recipe exchange. The second question: Don’t the dishes burn? “The app also uses a smart temperature sensor on the cooker to oversee a gentle cooking process. It tells you how many hours of sunlight you’ve got left.” In other words, this cooker is connected to the mobile phone network using Bluetooth. This is your cooker calling: dinner is served! 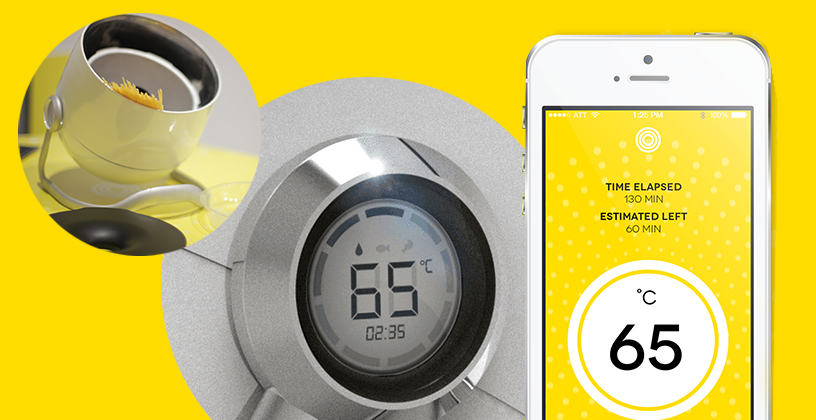 And last but not least, if this clever demonstration model is ever mass-produced, the price will be kept “under 100 euros” if at all possible. It’s a great design, but if it’s really to impact on the environment, it also needs to be affordable – then there’ll be no stopping it. Our verdict? A clear thumbs up.